‘I wanted to physically embody the weight of his words’

UCSC sophomore Bryana Espinoza protested Trump’s election wearing only her underwear and the words of passers-by scribbled on her skin.

The 18-year-old Art and Psychology major stood on campus for three hours next to a sign saying explaining her intent to give anyone speechless a voice.

“Grab a marker and write your sentiments about this electoral decision. Whether it be a word or a phrase or a whole paragraph or even  picture drawing. Please voice how you feel. I will carry your words on my body for as long as possible to represent the pain of the weight of President Trump’s words and the societal effects it has caused.” 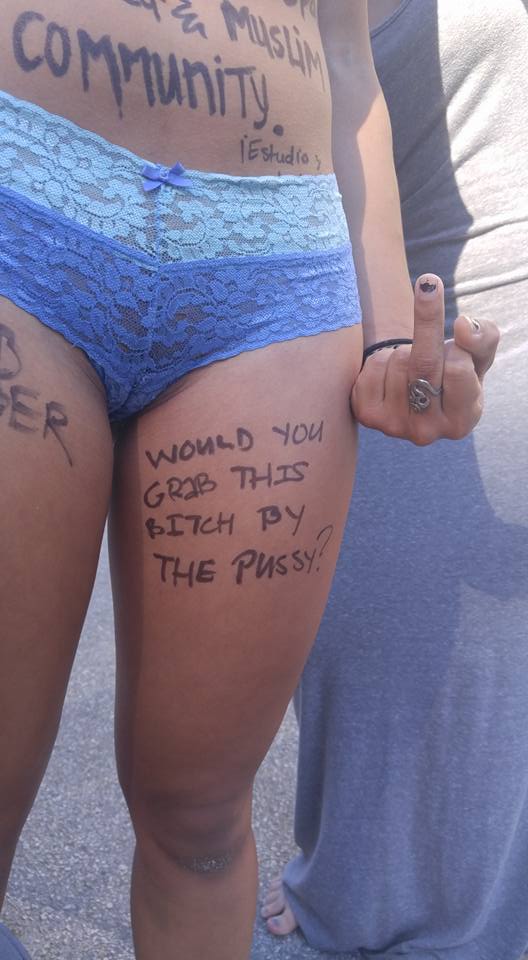 “Some of it’s rubbed off, it doesn’t look like it’s going to last super long. I’m going to a protest tomorrow too so I’m sure at most it will last until the weekend.”

The San Fernando Valley native made waves on campus yesterday and told us more about what inspired the demonstration. 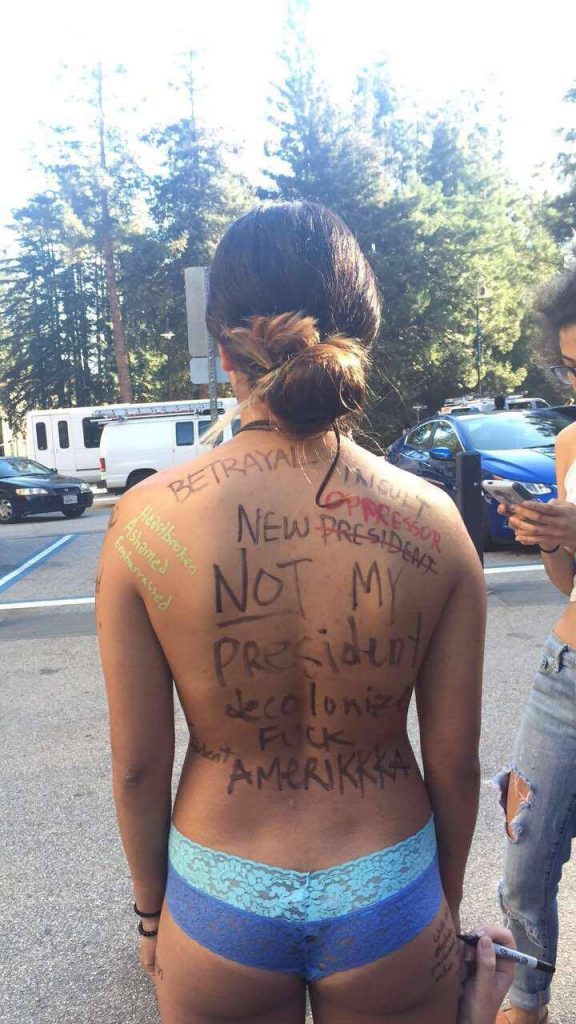 What made you decide to stage the protest?

The moment Trump got elected, me and my roommates got drunk. But when we woke up the next morning reality set in; everything felt heavy and everyone looked solemn.

I walked to campus for my first class and no one was talking to each other. It was so quiet. It felt like resignation. I understand being silent – I understand you’re speechless and you have no words for what’s happened – but we can’t be speechless together.

That’s when I started to think. Throughout Trump’s whole campaign his words have weighed on us and they’ve been hurtful. Whether we let them effect us or not, the words are always at the back of our minds.

How did you get into the mindset for when you first started?

When I went out to The Quarry there was barely anyone around – I saw one guy in a camouflage tent with a “Fuck Trump” sign and that was it. But the second I started everyone was incredibly positive.

One of the first things I did was ask a friend to draw an arrow towards my private parts saying, “Would you grab this bitch by the pussy?”

The whole point is that whether I’m clothed or not, no one has the right to say that. One guy came up to me and told me he understood why I was there but didn’t understand why I was topless and I told him no one was asking him to be there – he should leave if it made him uncomfortable.

What did make you decide to protest topless?

I wanted to physically embody the weight of his words in the most literal terms possible and be a catalyst for speech. All the UCs in California are protesting right now and I’ve thought a lot about what Santa Cruz and the UC system can do to create change.

I was trying to focus on art in this demonstration. Having a visual representation of something – like words on skin – is really impactful.

I also felt like this was an important statement for body positivity, particularly when a heavier-set friend came and stood with me. She said she would take off her top, but not her pants and of course I said to do whatever she felt comfortable with.

I should be able to control my own body – whether I’m clothed or not.

What was the best reaction you had?

There were so many positive responses, the support was amazing. People I didn’t even know said, “What you did was beautiful and I’m really proud of you, I would never have been able to speak were it not for this opportunity.”

Another girl quit her job so she could stand outside with me. I’d seen her walk past me before, but suddenly she came back and said while she was at work a co-worker had said something irritating. She told him to fuck off then stormed out.

I had a lot of women come hug me, and at one point an Indian woman came and hugged me. She said, “If I hadn’t seen you, I would’ve been afraid to walk through campus right now.” 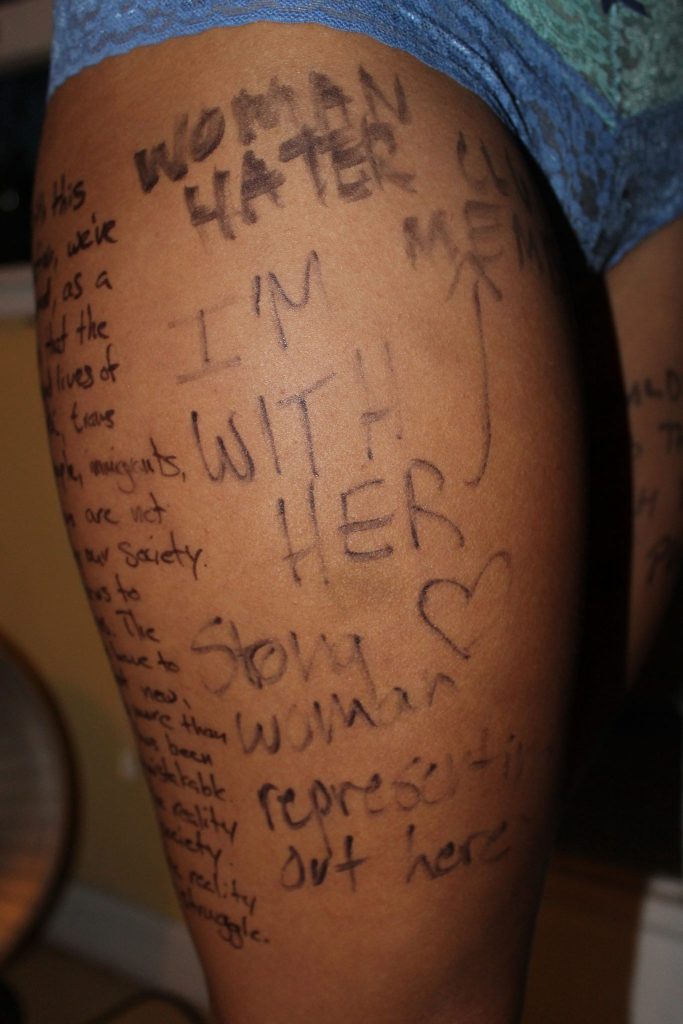 What was the worst?

One guy saw my pictures on Facebook and said, “Wow, you have a banging body. I wish I could’ve ridden it.” I was so angry, I told him to stop trying to sexualize me when it’s the complete opposite of the message I’m trying to convey.

I had one slightly weird guy who made me uncomfortable. When I started out this guy was very polite, and asked if he could write on me. Then he kept going, and kept asking if he could write on different parts of my body before I told him to chill out and leave space for everyone else. He sort of left but was standing lurking there in the background. When my friend came back to join me, he came back to write again and started to grope our breasts. He’d pretend he was lifting our boobs – I don’t have any boobs, there was nothing to move. I told my friend it was her body and if he was making her uncomfortable she should tell him to fuck off.

A ton of friends came out to support us though and make sure nothing bad happened to us. Some of them realized that kid had been there for too long and told him he needed to beat it.

What was your favorite thing that was written on you?

The most impactful was making a point on daylight savings time, it said: “We set our clocks back one hour and our country back 50 years.”

Another said, “This election is more unifying than you think, stay strong” – I thought that was really good. 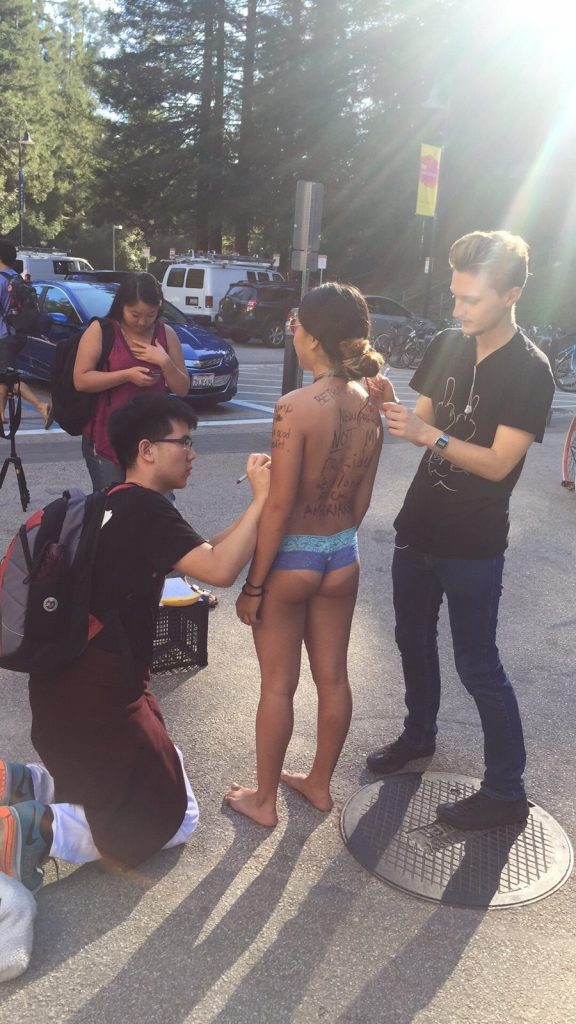 What are you doing next?

I have a couple of things planned, but today I’m flying back to L.A. to see my family, protest and go to a music festival. I come from a Conservative family and was sort of worried my Mom would beat my ass when she saw it.  She said, “I’m really proud of you and I think it’s beautiful but you shouldn’t have to expose yourself like that.”

Once I’d explained it to her, she said, “I’m so proud of the person you are. You’re taking a stand for people who don’t have a voice.”

I’ve had so much support from people on campus, but getting it from my Mom, someone who’s so dear to me was the best possible reaction.

Some of the things that were written on Bry: 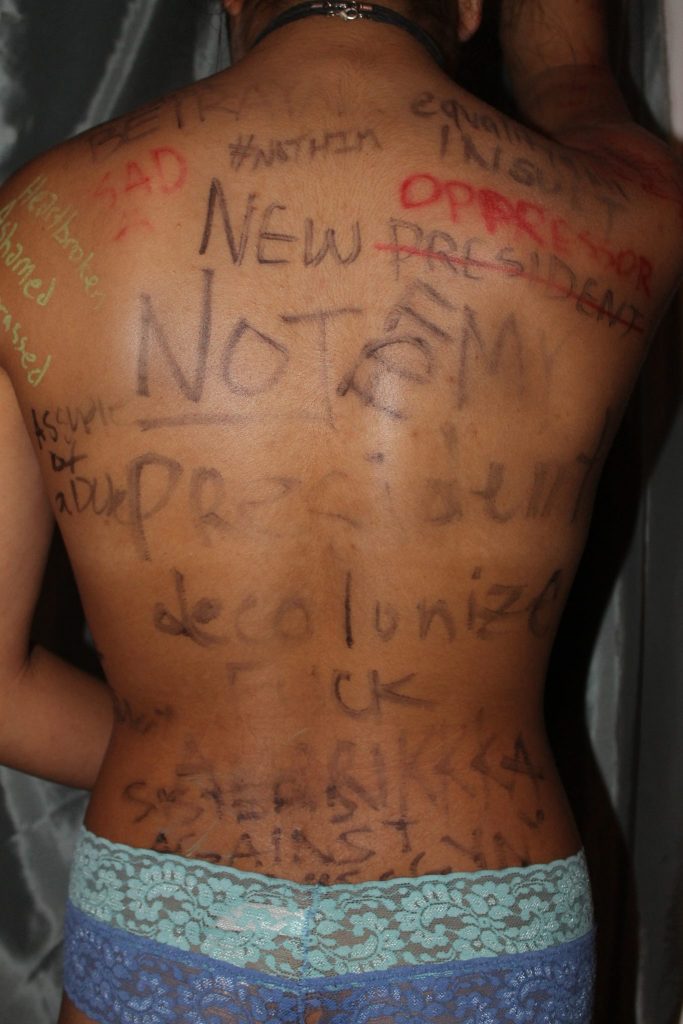