Alas, I must return to the sea 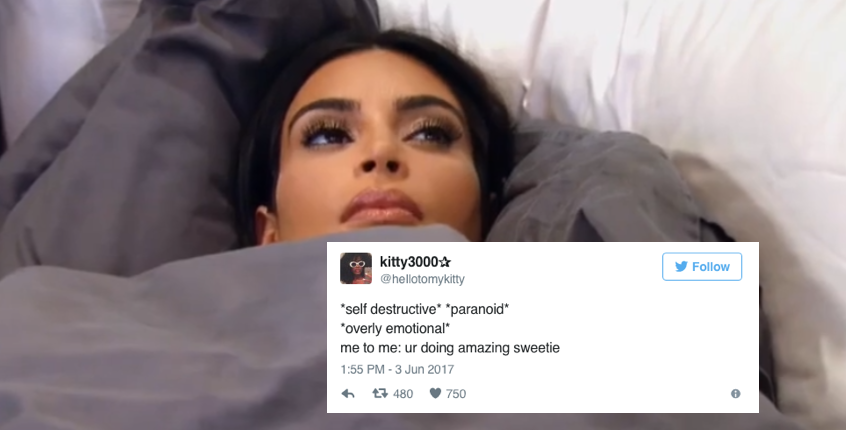 If you’re a piece of shit that continues to make terrible life choices even though you know exactly how it’s gonna end up, say haaaay! Say hoooo!

No, but seriously. I find myself asking me why the fuck I’m like this every day and if you’re a swamp person from Trash Island, I’m sure you can relate.

I mean, this is just our life:

The floor is unhealthy eating, spending, and sleeping habits. pic.twitter.com/BoIteT5LKe

When you didn't get the 4.0, your body isn't summer ready, and your eating habits are still unhealthy but it's summer.. pic.twitter.com/orI8jvaQB3

me: i don't drink soda, my body is my temple. self care is a divine responsibility ?☝️

Thank gosh for our friends, though:

when u finally find someone who loves u unconditionally, supports u and always tells u ur beautiful despite ur self-destructive tendencies pic.twitter.com/6VrnjG6VLv

Because this is on a never-ending loop:

Hi I'm nick the busted, and you're watching my mental health destroy me. pic.twitter.com/n8JFAYys1r

HMU if you wanna be mean to me, tickets are still available!

the floor is having unhealthy relationships with people who don't care for my wellbeing & are destructive to my mental health & self esteem pic.twitter.com/pN1lJog3Zh

The truest squad I know:

My depression and anxiety arguing over who helped ruined my day more pic.twitter.com/im1V83Qd9e

when my anxiety and depression are mingling pic.twitter.com/PHLsfQpyOp

Me whenever I have the opportunity to embarrass myself on the internet pic.twitter.com/sn7VaU8lDA

Some things will just always be a mystery:

me: *tries everything to get rid of eye bags and dark circles except getting enough sleep*
me: i…just don't understand pic.twitter.com/FEuI3YFcf9

me pretending to be neurotypical and sociable at work for tips pic.twitter.com/VstfgtcbXL

Visual representation of me pretending everything is fine when it's not pic.twitter.com/w0nuDf53Vl

me: i wish my friends would come over and see me when i am sad

my friends when i'm sad: u want me to come over?

me: what? no i'm fine pic.twitter.com/3MrOpMMcwI

The honesty (and loyalty):

[concert]
SINGER: hows everyone doin tonight
CROWD: woo
ME (from the back in a normal speaking voice): it's actually been a tough few months

*self destructive* *paranoid*
*overly emotional*
me to me: ur doing amazing sweetie

I am my own greatest stan, but also my own biggest hater:

im the most toxic person in my life&i'll just keep ruining my own life w self destructive behaviour that i will keep repeating until i die pic.twitter.com/5ZZHthX1Uj