If he suddenly stopped texting you back, it’s not your fault — this is what happened 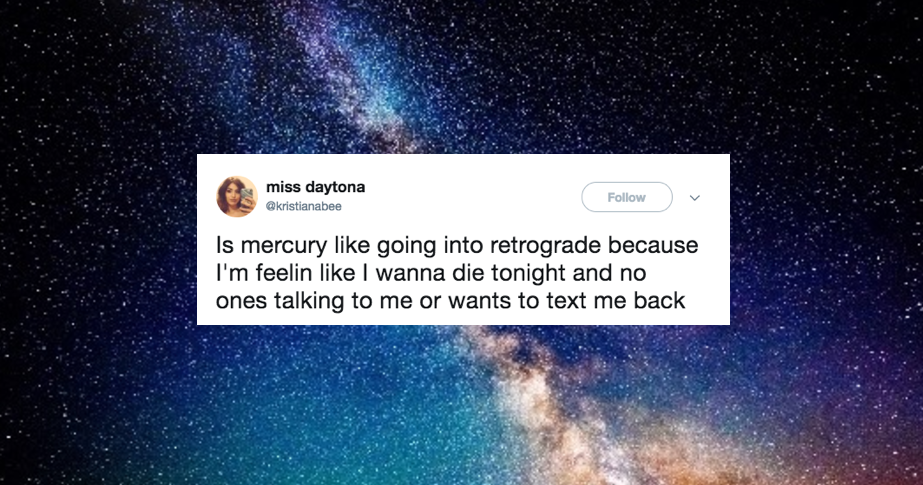 He didn't text me back because Mercury is in retrograde.

Now before you call me delusional and psycho and out of touch with reality (tag yourself, I'm all three!) I need you to know two things: the stars are real and they're vindictive, and please just let me have this sense of control in an otherwise random and cruel world of chaos and heartbreak. Cool? Cool.

So anyway. I know it's not just me. Mercury in retrograde is notorious for fucking up all forms of communication and technology. You know, communication. Like a message. And technology, like the phone on which you'd send a message.

And this isn't just me being a crazy crystal bitch, either. There's actual science behind this shit. Well, kind of. See, Mercury retrograde is when the planet passed Earth in orbit and then appears to kind of slow down and go backwards (retrograde!).

sorry i didn't text you back, mercury is in retrograde

Since Mercury is in charge of all those little things like deadlines and communication and technology, it gets fucked up and things go wrong. And to make matters even worse, right now Mercury's retrograde is in Virgo. Have you ever met a Virgo? Those bitches overanalyze everything. So if all these screw-ups are making you especially anxious, that's why.

All depends on Mercury's retrograde

Blessedly, things will start to clear up on August 31 though we won't be fully out of the woods until September 5.

In the meantime, take some Xanax and resist the urge to double-text. It'll all be OK. Probably. Maybe. I don't know, I'm not a space scientist.