What your Halloween costume says about you

Lord help you if you’re a ‘Last-Minute Mess’

If your eyes are the window to the soul, then your Halloween costume is the window to your brain, heart, and (possibly) your vagina.

What you choose to wear on the Greatest Night of the Year says so much more about you than just what you thought would be most Instagram-able. It's who you are, and what you want to be.

Here's what your costume says about you, complete with custom illustrations by Lucy Turnbull. 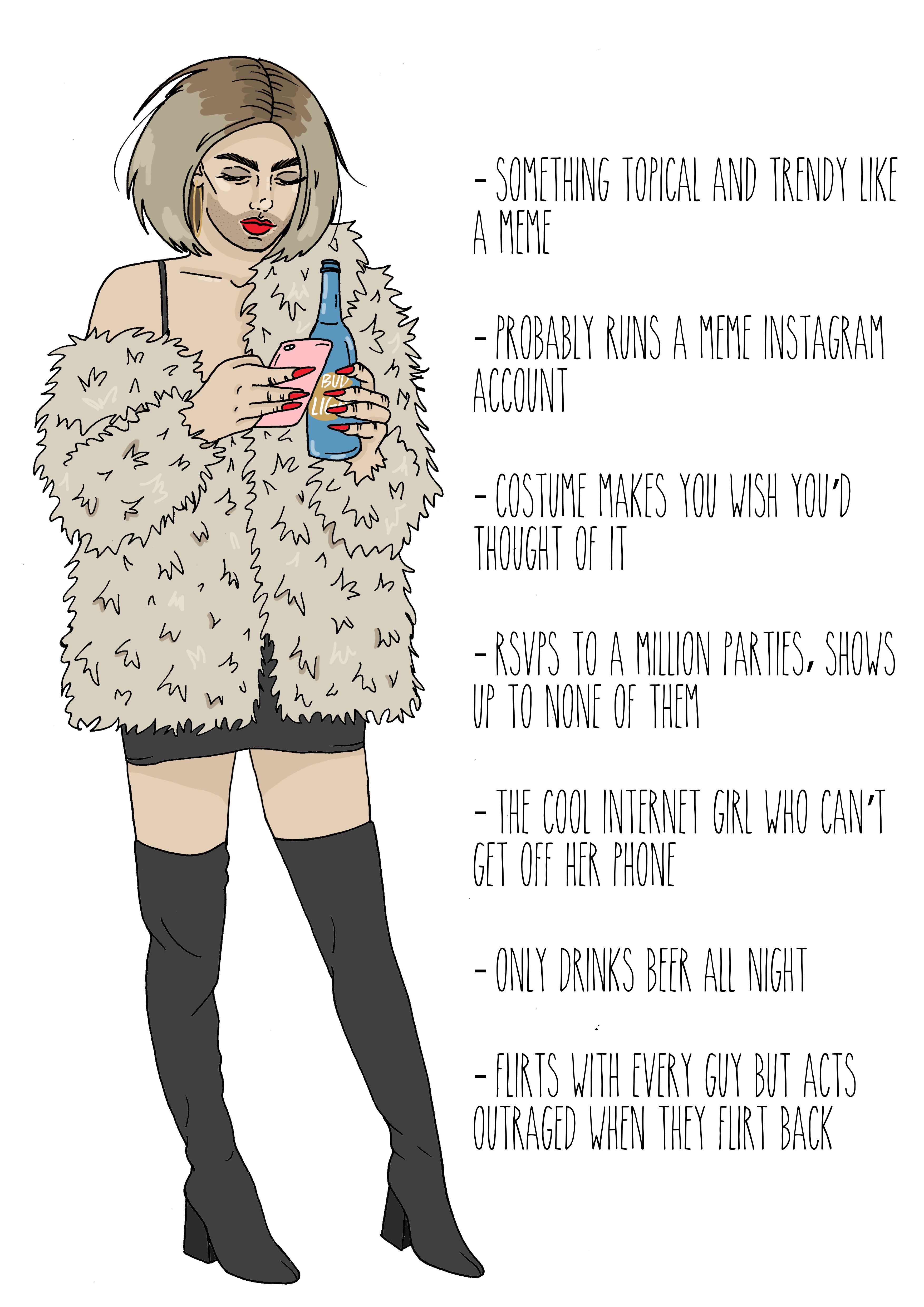 You're Kris Jenner, Joanne the Scammer, You Know I Had To Do It To 'Em. Doesn't matter what clever, Internet-y thing you turn up as, everyone else will wish they had thought of it first.

You're the kind of girl who manages to find the one cute cami at Forever 21 and make it look like some fabulous one-of-a-kind thrift store find from Istanbul or whatever. That's your whole thing — you're so cool is almost annoying. You drink cheap, shitty beer because you "doesn't care", leave guys on read, and speak in Vine references I hate that I don't get. 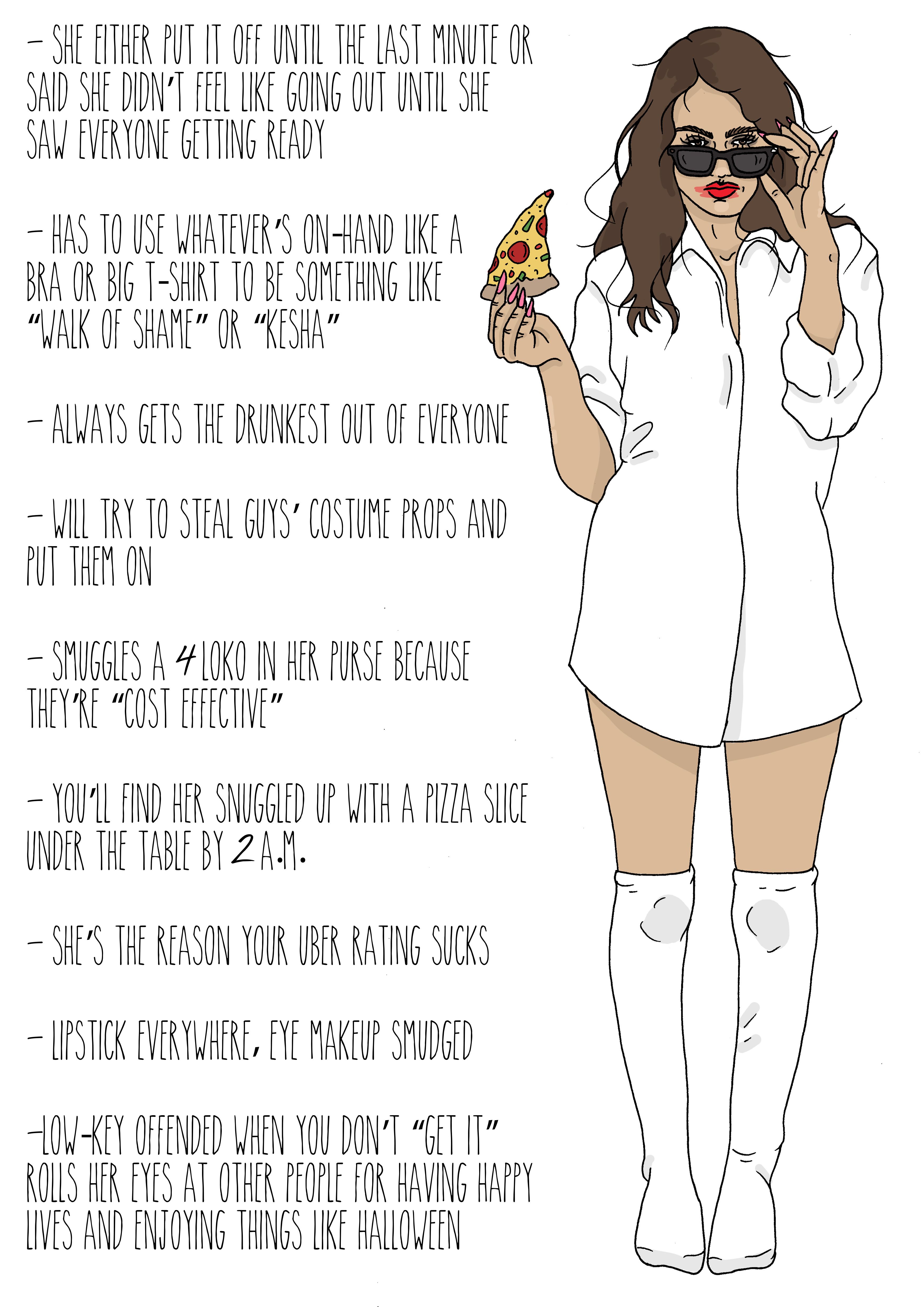 Look down at your phone. The screen is so cracked, bits of glass keep falling out, right? Yeah, that's you. There was no pre-planning for the costume, just a quick scan of the clothes you already own to see what would be the most comfortable/show the most skin. Risky Business again it is!

You're fun as fuck but kind of a mess. You never bring your own booze to a party, scream WOOOHOOOOOO when "your song" comes on, and declare — in front of the host — that "this party blows" when you find out no one has weed. There is a high chance you'll end up making out with one half of a couple's costume while the other one cries in the bathroom. 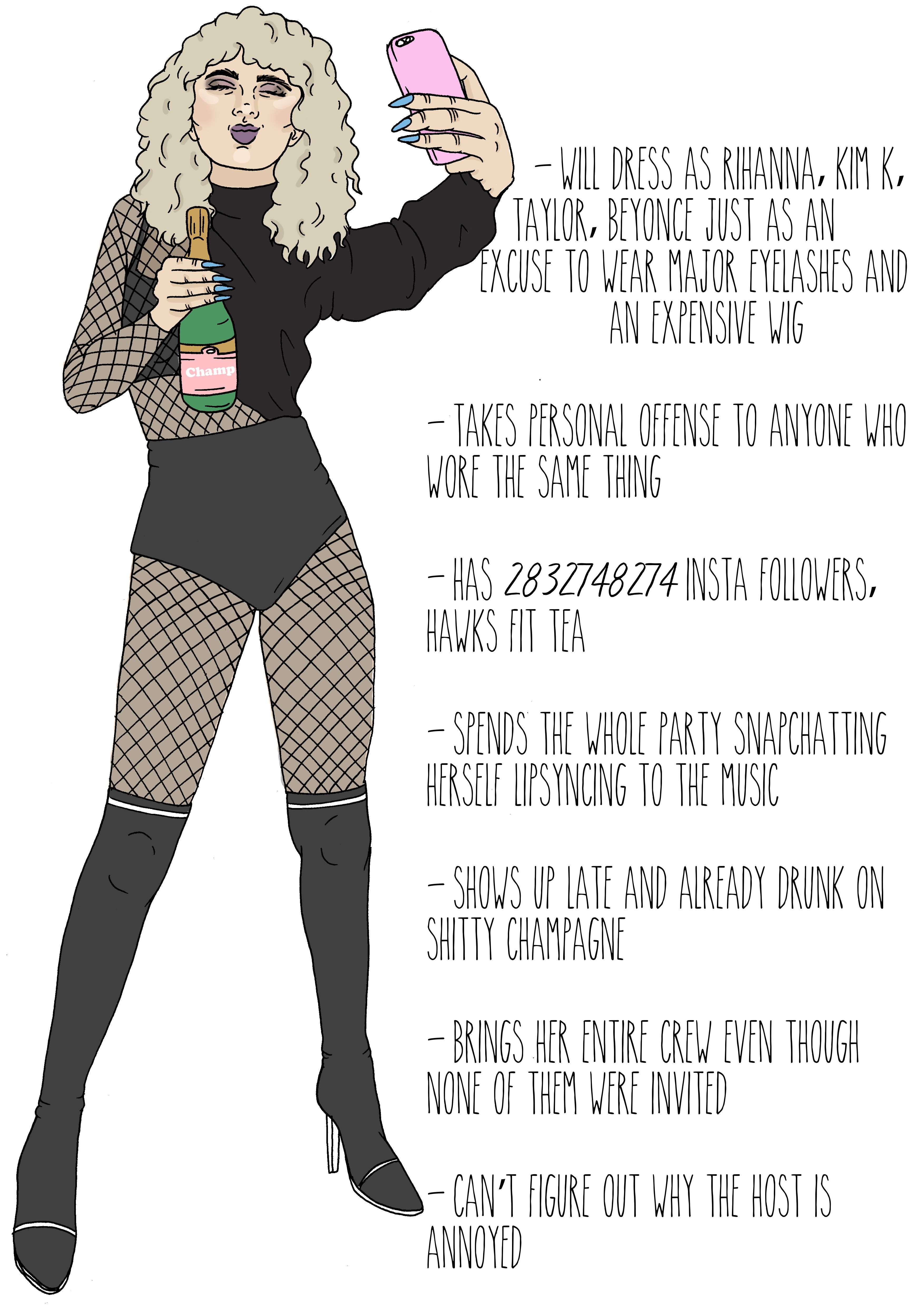 You probably brandished a Louis Vuitton Speedy bag in 10th grace like a shield against the Regulars who populated your high school hallways. North West is your spirit animal, and you are truly too glam to give a damn. No, literally. You don't give a fuck and it can be kind of bad!

You'll show up at the party, sweeping into the room in a cloud of Dior Poison perfume and surrounded by 12 of your closest friends who were not invited. You'll spend the night lip-synching to Bodak Yellow for your zillions of Insta fans then vanish, leaving only a sparkling wine puddle in your wake. I hate you but also very much want to be you. 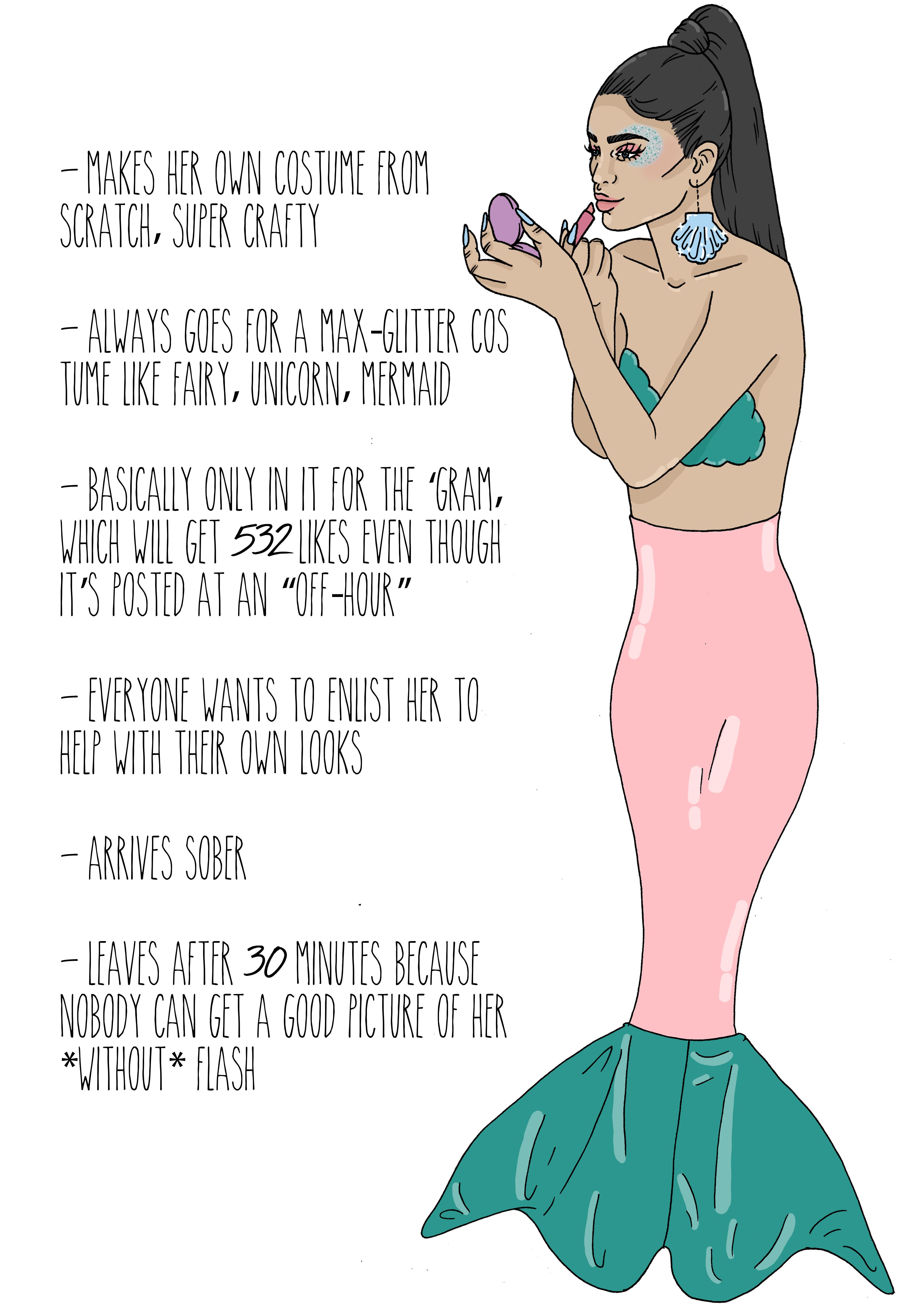 You've been working on your #look since August and it totally paid off because you look like the sexiest, sparkliest fairy/woodland sprite/evil mermaid/Glam It/winged unicorn I've ever seen. But that's where Halloween begins and ends for you.

It's a chance to overdose on dramatic makeup and a hot costume that'll be Pinterest fodder for years to come, and that's it. You could give a fuck about the party, the booze, the chance to fuck two guys dressed as Wayne and Garth. You're all about fashion, and that includes Halloween. Everyone can always find you, though, because all they have to do is following the trail of glitter your mermaid tail is leaking. 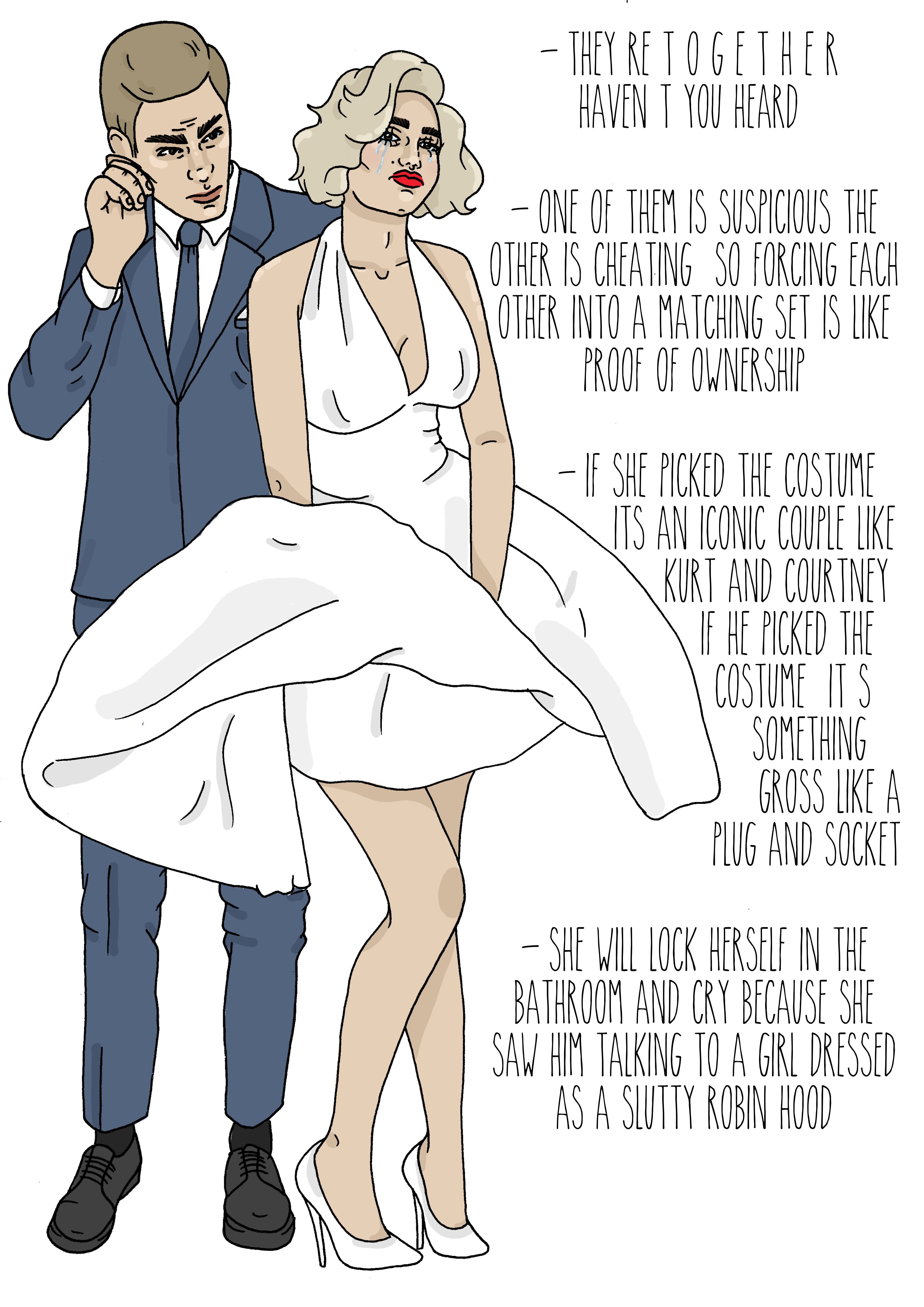 You're the couple who's always fighting in public. You text him stuff like "Have a nice life" when you see that she's liked another girl's Instagram picture, then you get mad when he doesn't contact you after you've blocked him on every single form of technology you own.

For you, though, it'll all be worth it if you can get a cute picture together so you can caption it something ~sweeet~ like "the only treat I need" or "all treats no tricks." 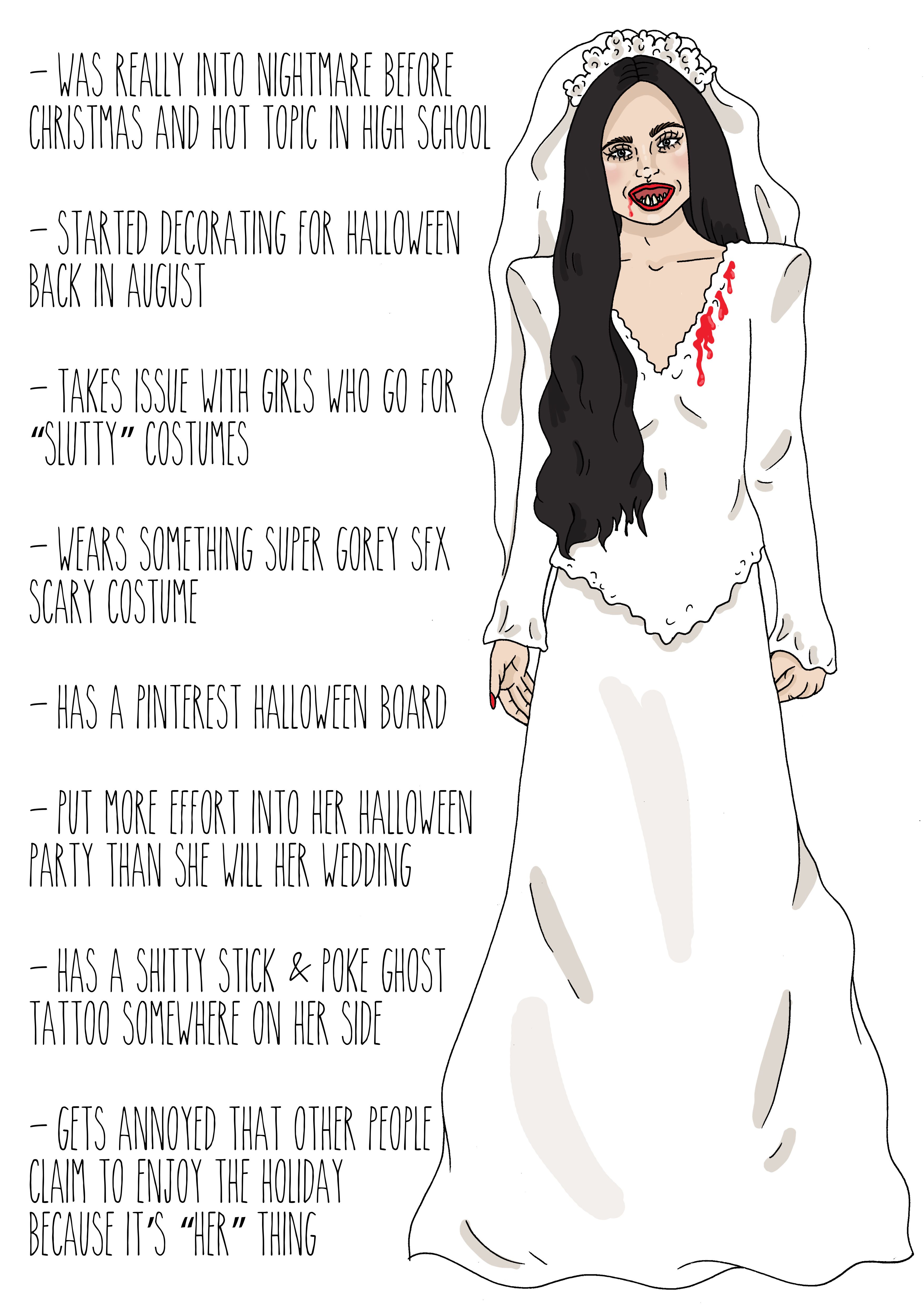 Your emo phase is just beginning, I get it. The second you feel a slight breeze the first second of September, you get so excited you could scream. Halloween isn't a holiday for you, it's a lifestyle. And god forbid anyone tries to calm you down or (gasp) claim to like it, too. It's your thing. And if you can't have a reunited My Chemical Romance, you at least want to have this to yourself.

You've put in a month's worth of hours into watching special effects makeup videos to get the goriest look possible and you stood in line all night to be the first person to see the new It movie. 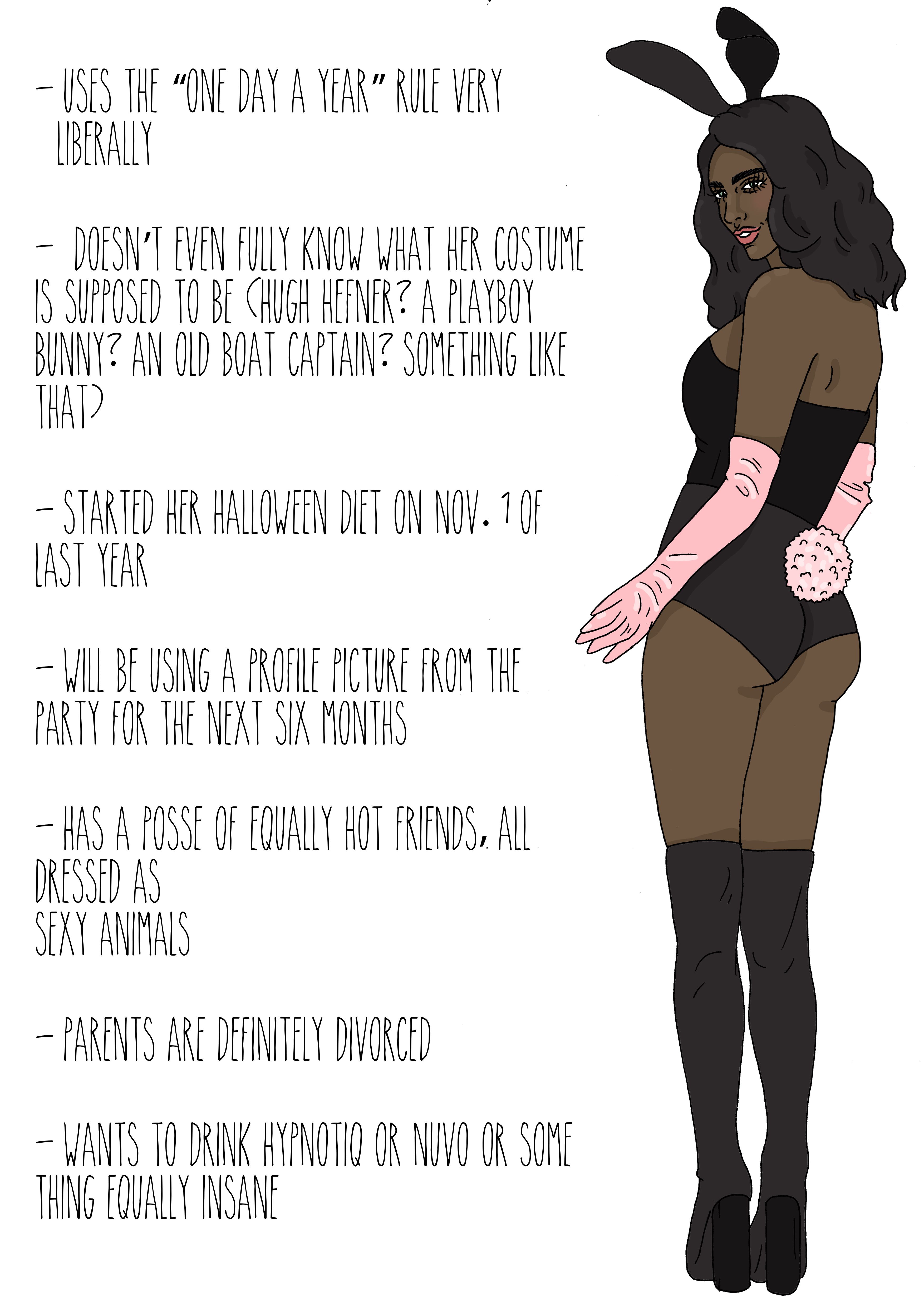 You started working out the day after last Halloween to ensure whatever delightfully thot-ful costume you squeeze into fits like a glove. But the hoeness isn't regulated to just Halloween! You find a way to shine as Chief Executive Hoe 365, girl. You probably call the number of people you've slept with your bodycount, and your Halloween walk of shame is exactly the same as your many others — it's just that this time, you have to ride home with wilted bunny ears, clutching a sparkly stiletto. 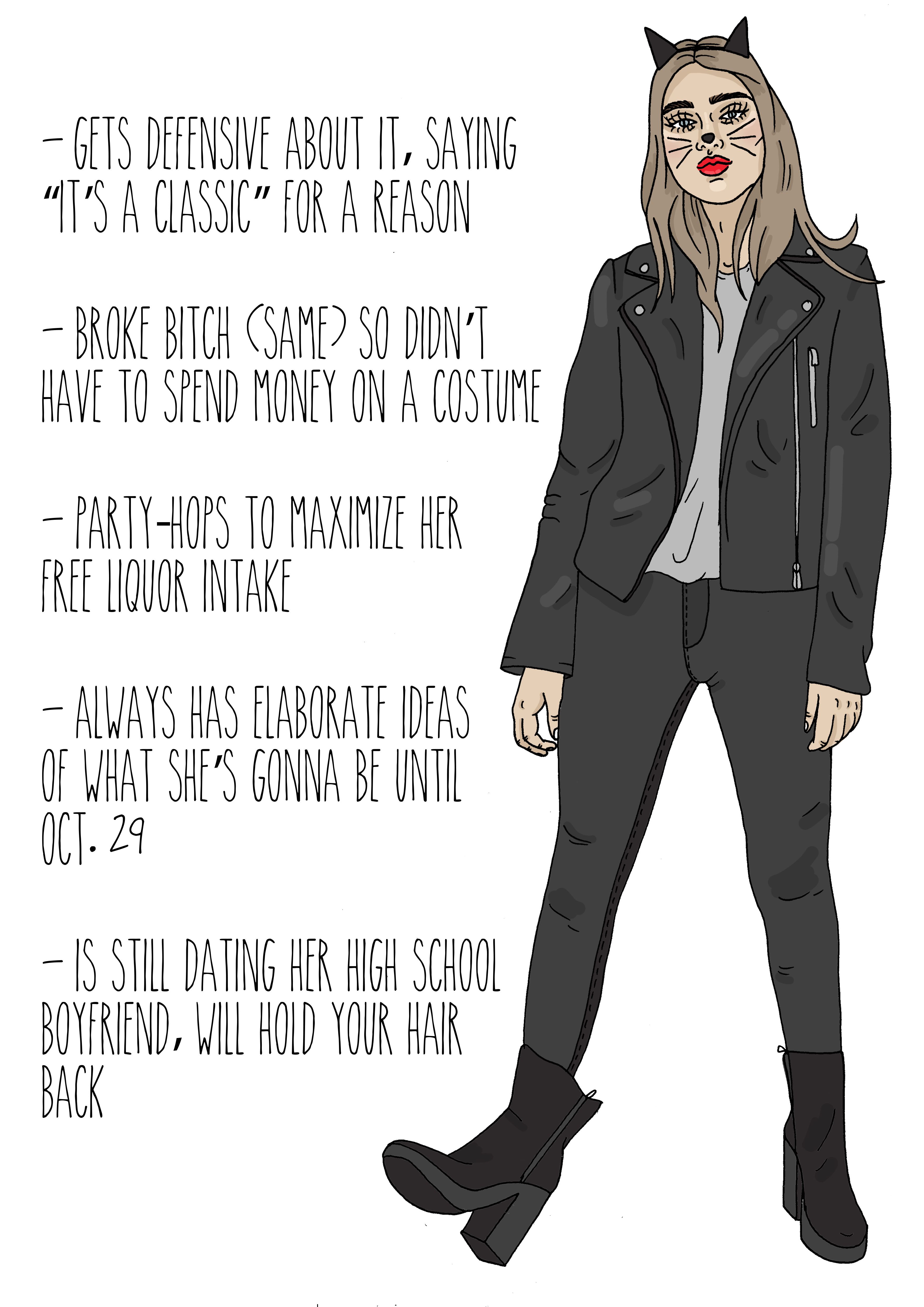 You're the kind of friend everyone wants to have with them at a party. The cat costume is low maintenance, but it doesn't look like you totally don't give a shit either which is kind of key for Halloween. The thing about you, though, is you always have some major idea for your costume that you're super pumped for…until Halloween actually rolls around and you can't be bothered to dress up like a Peacock or a Blue Ivy or whatever.

But you're reliable, just like your costume. You shepherd your friends from party to party, collecting jell-o shots and Dos Equis like a kid trick-or-treating. At the end of the night, you make sure your wasted friends are tucked into their Ubers or on the way to meet their on-again-off-again situationships and head home to chill either with your boyfriend of 3+ years or…yep…your cat.