How did I not see this before Stormi? 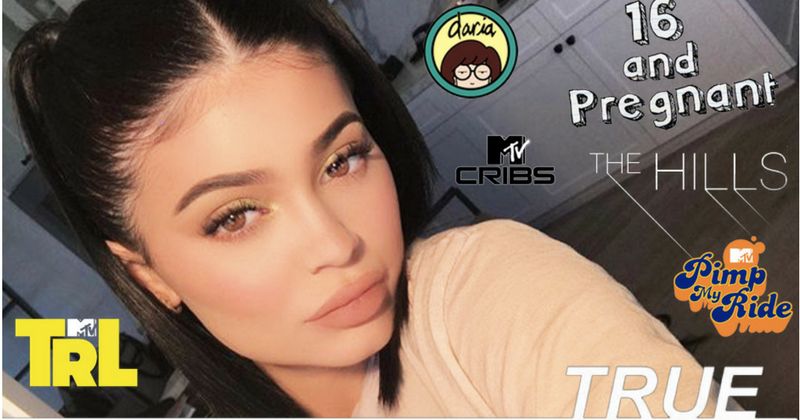 It’s not some shocking revelation to admit we’ve all been Kylie-obsessed for the past 9 months, but since the youngest of the K-cult has now surpassed the networth of older sex pistol sister Kim, I couldn't seem to pinpoint how or why she's had all this success. I'm not sure what came first, 'The Hills' or the lip kit, but it wasn't until Kylie reached the motherhood milestone that I had my eureka moment: everything in her life is just an amalgamation of MTV classics. No, seriously. Let’s examine:

My Super Sweet Life of Kylie/Promposal

Back when Kylie went rogue on KUWTK and created her own show, she filmed an entire episode dedicated to her accepting a promposal from a hopeful fan wanting to date a Jenner. Similar to every episode of My Super Sweet 16, she made a grand entrance and then was escorted upstairs, watching the common prom-goers watch her every move in absolute awe.

Made: I want to look like my sister, Kim Kardashian

We all know Kylie wasn't born with those lips. She fessed up to it a while ago, but the rest of her face is pretty obviously not the one she was sporting in seasons 1-7. The boobs, ass and waistline are also up-in-the-air questions, and I'd be willing to bet that she went to sister Kim's doctor. Do you girl, but that stuff is expensive. I hope she got a sibling discount or like a loyalty punch card. You know, buy the face and get the boobs for free?

True Life was a show about real challenges that real people had to overcome, but Bruce transitioning into Caitlyn was not the easiest thing to swallow for the youngest of the Kardashian clan.

Total Request Live is really just a show about 5-10 minute interviews with current and upcoming artists. However, Kylie's relationship with Tyga was about as long as a TRL segment. And I'm pretty sure rappers are like, her type now. I still wonder if her convos with Travis Scott are anything like the Grammy pre-show interview with Lil Uzi Vert.

If you're a kid with rich parents and virtually nothing else going on, then you get a reality show where you're paid to sit around in a big-ass mansion, look cute for the cameras 24/7, and stunt on all of middle America's middle class with some vocal fry to boot. I mean, isn't that the premise of KUWTK?

Just like Daria, Kylie is an enigma. Some would say "completely devoid of personality" instead, but I’d never be so cruel. She looks super bored and undewhelmed, and her face reads that she's completely over whatever you have to say in nearly all of her interviews. Simultaneously, however, she can be just as annoying as Daria's sister Quinn who is in the mirror all the time and worried about what other people think about her, whining and screaming when she doesn't get her way.

Kylie has had about five luxury cars and (Mercededs G Wagon, La Ferarri, Rolls Royce Ghost, Mercedes Mayback and Ferarri) has had them painted or primped a few different times. If it wasn't apparent before that she's just as obsessed with cars as she is with her makeup, go watch her LipKit promo again. I wouldn't be too surprised if she went to West Coast Customs on a daily basis.

'Rob and Big' was really 'Kylie and Jordyn'

Kylie's reality show was supposed to be an inside look at the most famous then-teenager on the planet, but it mostly just showed viewers the relationship she had with longtime BFF Jordyn Woods. These two girlfriends were about as inseperable as Rob Dyrdek and his late bodyguard who went everywhere with him. And Jordyn following Ky around was basically the plus-size model's side job. You know she’s on the Jenner payroll.

A lot of Kylie's app is dedicated to showing off her dogs, her house and the three different closets dedicated to clothes and accessories that could literally be featured in its own episode of MTV Cribs. But hey, that's what the app is for.

The most recent MTV show representative of Kylie's life is 16 and Pregnant and now Teen Mom since giving birth to Stormi—just with a lot less yelling and fewer trailer parks. She's now 20 and making her way back into society and onto Snapchat, and we can hopefully expect a sex tape with Travis to surface similiarly to Teen Mom OG, Farrah Abrahams. Only time will tell.