By now your aunt has probably tagged you in that heartbreaking photo of the old man in tears, alone on Valentine's Day. His head is in his hands as he sits in the booth of a restaurant, a glass of wine for him and one for his dead wife.

This man is there by himself because, we're told, despite his wife's death, he still wants to celebrate Valentine's with her.

"His love for her was and still is very strong as he takes her ashes out for a Valentine's lunch date together," says Chasidy Gwaltney, the Corpus Christi, Texas resident who uploaded this photo below to Facebook.

It has amassed over half a million likes and almost as many shares, capturing the hearts of Americans distraught that this cute old man has to spend Valentine's without his beloved wife.

So you'd have to be actual scum, a true asshole, to call bullshit on this. Right?

As always with posts like this, it's worth looking a little closer.

Let's start with the wine glasses – check out how much is in each one. 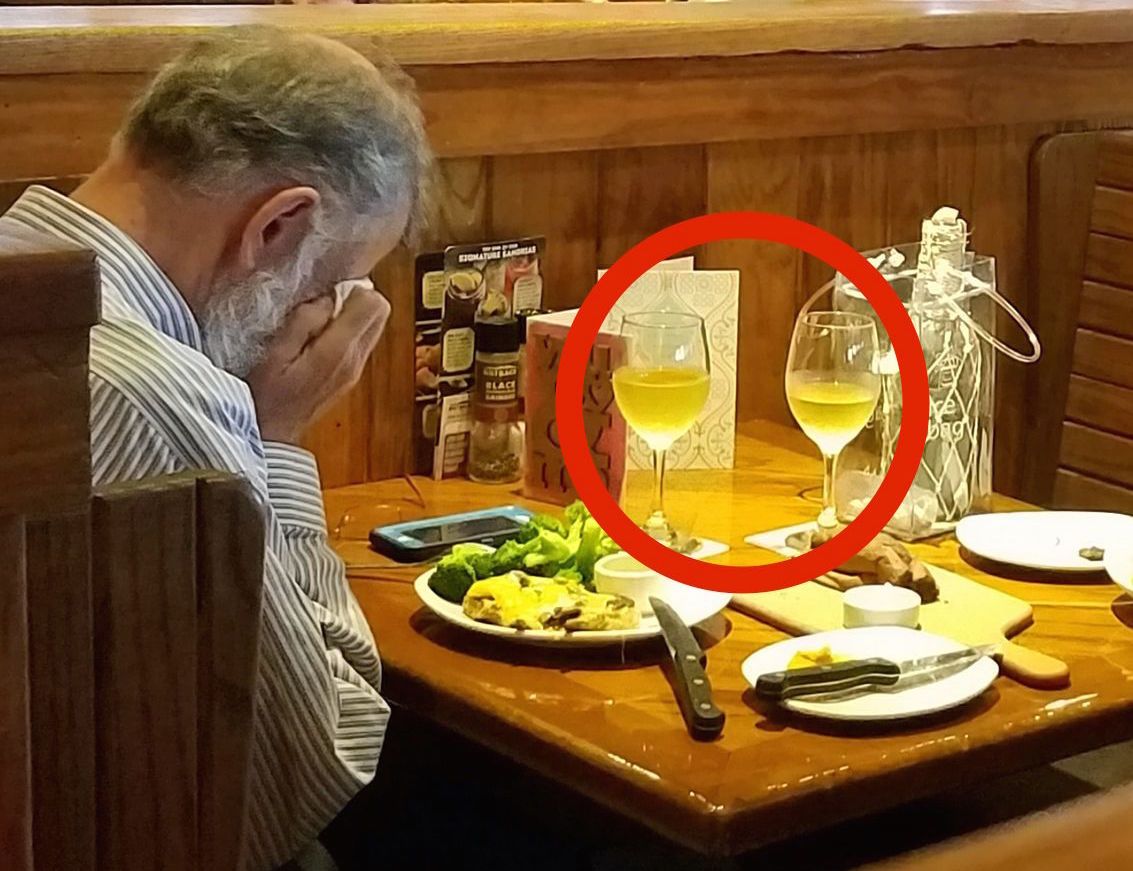 Why is his glass for his wife – the glass furthest away from him – less full than his own? You can even see a ring of condensation where someone's taken a sip. Is someone sitting in that seat?

Now look at the Valentine's Day cards. Who gets their partner two cards? Why would you get your wife two cards? 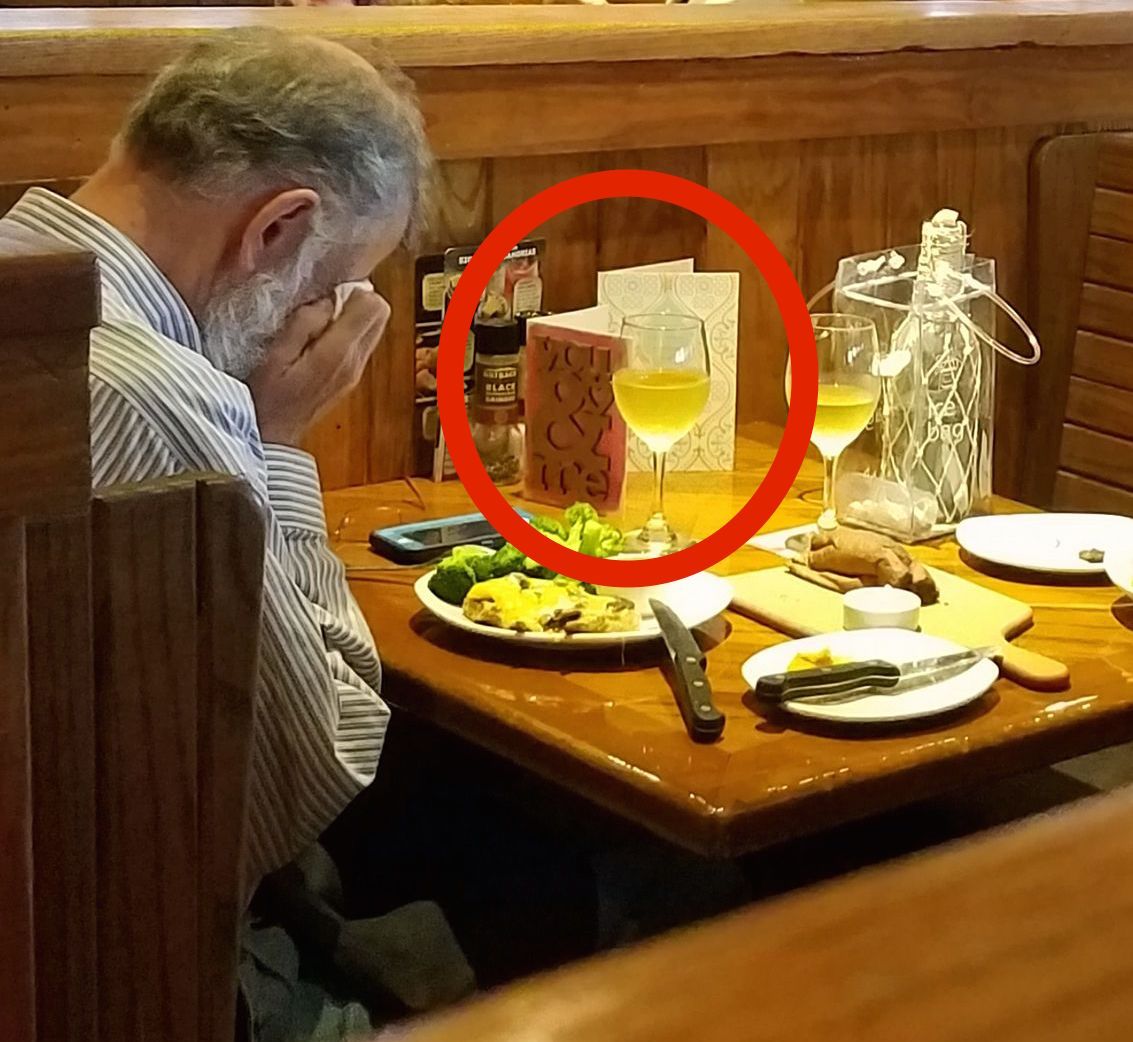 Now look at his wife's side of the table. Something's on her plate. And if you look closely, she's got a salad bowl, too. What does she need two dishes for? 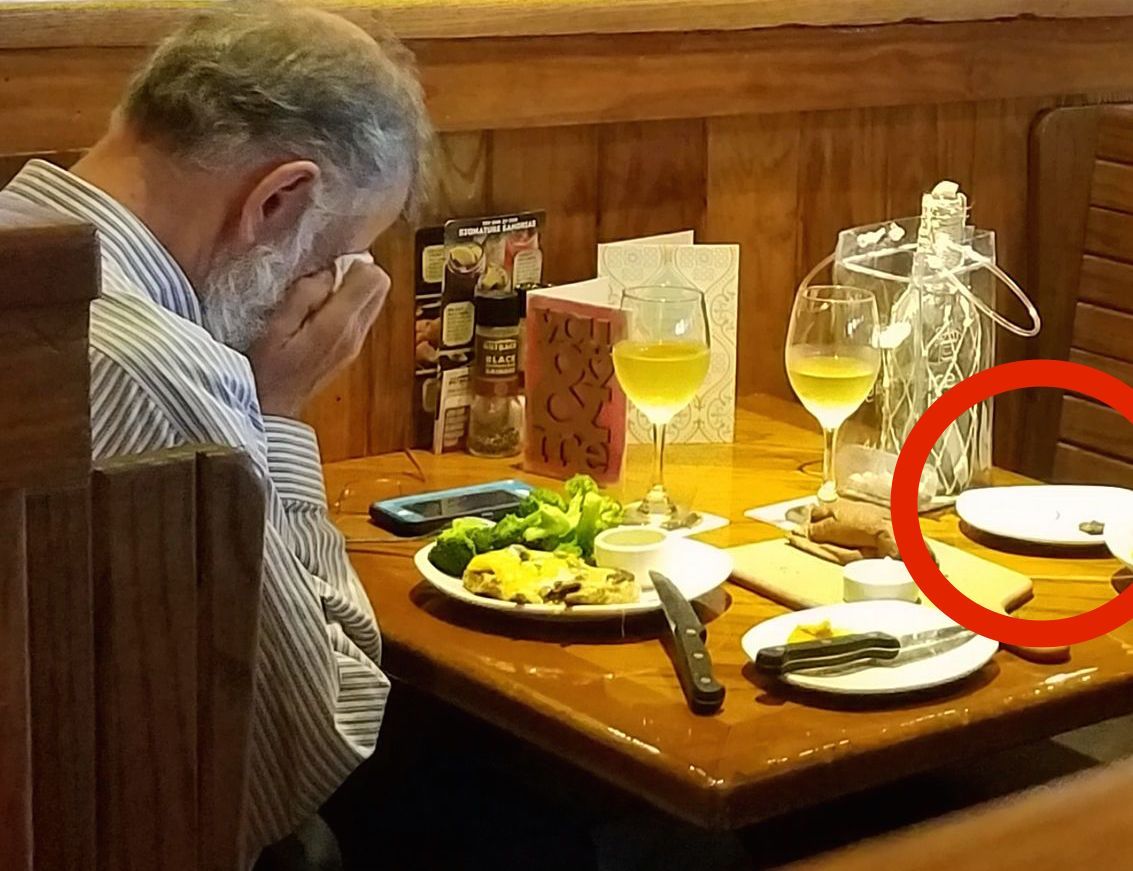 Next up, the bottle of "ashes." Chasidy Gwaltney, the woman who took this man's photo and uploaded it to Facebook, wrote: "That is actually his wife in that very beautiful bottle sitting on the table."

I've got a lot of questions about this bottle. First of all, it's in a $10 ice bag that you can buy on Amazon. Second, it looks like there's ice actually in it – why would you put ice in your wife's ashes? Third, isn't that just the wine bottle this man ordered for lunch? Fourth, if you love your wife so much that you're taking her out to lunch on Valentine's Day after she died, why would you keep her in a discount plastic cooler bag?

Not to mention there's no way human remains would fit in a wine bottle. Urns are bigger with wider mouths. Plus, there's no way any respectable mortician would put someone's wife in wine bottle. And maybe I'm just splitting hairs here, but why does she have to stay in the bag? It's not like you have to chill ashes.

Facebook commenters who spotted this are pointing it out on links to the news story – along with noticing that the bottle is probably too small to hold a person's ashes.

So that leaves the question – where are the ashes? If they're not in the ice bag, it doesn't look like they're on the table. So how did Chasidy know there were ashes to begin with?

Also, how does Chasidy know about any of this? Nothing in her status suggests she actually spoke to him. She just took a creep shot from her booth in the restaurant. Yes, the photo looks sad. Yes, it looks like the man is crying. But how did Chasidy come to the conclusion that the man's wife is dead?

I tried to contact her – as did a whole load of other news sites who just went ahead and published the photo anyway – but she didn't respond. So much about her post doesn't look right, as people commenting under her original post have pointed out. Wouldn't she want to set the record straight?

So I went down another route.

If you zoom in real close on the pepper grinder, you'll notice this photo was taken from Outback Steakhouse, everyone's favorite (or only) Australian-themed restaurant chain. 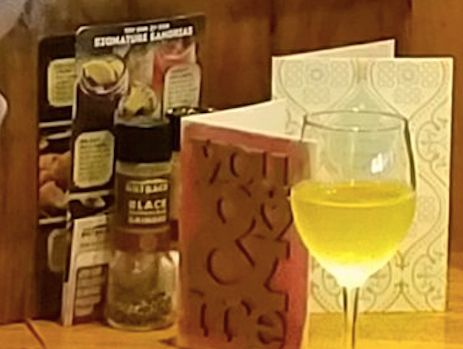 I called them, and they quickly hung up the phone, saying I had to make the tedious step of talking to their corporate office. A few calls and emails later, they still haven't gotten back to us. I'll update this post if they do, and apologize out my entire ass if it turns out to be real.