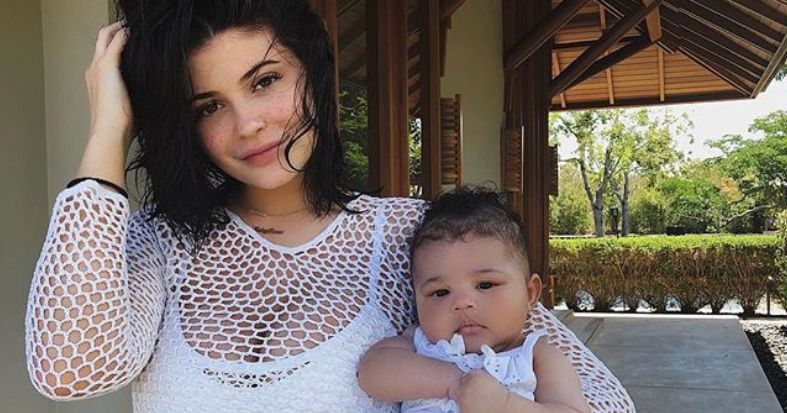 I would literally die for Stormi Webster. Her life is already worth so much more than mine — literally and figuratively — and she's like, two months old. Plus, she looks like a little teddy bear. Yes, believe it or not, I work at babe.net and still find pure things cute. I have a soul. I swear to God.

I just really want the best for Stormi, and that means solving the mystery of her paternity for the whole world to see. There were rumors that Tyga and even Scott Disick where her daddy even though she has Travis Scott's last name. But there's really no way either of those are true. Tyga is too fucking lame for Kylie to even bat an eye at him. Like, as soon as she got old and realized he was fucking her at 17, she dropped that REAL quick. And Scott is an asshole, but I don't think he'd fuck Sofia and Kylie. That seems… unhygienic.

Twitter's last theory on Stormi's baby daddy is the MOST CONVINCING yet. They think Kylie's bodyguard knocked her up.

And they could maybe possibly have a point? You know, like those people who think we live in a simulation? Like, look at this photographic evidence.

Of course, people freaked OUT at this possible breakthrough

YOO WHAT IF SHE …. pic.twitter.com/8YCw9XSkEQ

And lots of Kardashian jokes were made

There's truly a GIF for every occasion

ARE YOU THINKING WHAT IM THINKING pic.twitter.com/Je26hQQyDO

But everyone decided… they wouldn't blame her!

This man is… fine as hell

Well do we blame her pic.twitter.com/Zbf12R5cXE

• Proof Kylie Jenner’s pregnancy was planned from the beginning

• Want to hate yourself? Here are the hottest pictures of Kylie Jenner

• I’m pretty sure Kendall Jenner is gay, and I have evidence for days