Hate me all you want, but Azealia Banks is right in this feud with Cardi B

Let’s count the dark-skinned Black women in mainstream media, shall we?

Two of the biggest female rappers of our time are back battling again, but not in the way you'd want them to. After Azealia Banks gave an interview to 105.1's The Breakfast Club defending why she called Cardi B an illiterate untalented rat, there was a lot of controversy surrounding her answer.

When she owned up to the name-calling, she said it wasn't out of nowhere:

When I look at Black women's culture, as like a whole thing and you think about the media and the power it has and putting anyone at the forefront, this is what they're trying to grab Black women's consciousness with right now. About 2 years ago, there was this conversation surrounding Black women's culture and it was really high,and then everything kind of changed and then, you know like, Cardi B.

It's like I just don't understand the extreme lack of couth. I've never seen that at the forefront of female rap. I didn't know that the bar would be lowered so much. When you're talking about this female rap thing, like bitches that really push their pen, girls that like live and breathe this art thing, I just feel like it's really unfair to the real institution of female rap.

Banks continued to insinuate that the caricature Cardi B upholds is one that Black women, who don't have Cardi's light-skinned privilege, would never be able to get away with. "If my spelling and grammar was that bad, I'd be cancelled."

Cardi B attack’s black women by degrading them for their skin tones, calling them roaches ect. Y’all forgave her but won’t forgive Azelia Banks? Y’all just want a reason bc they all attack one another.

Azealia said she was baffled about the switch in mainstream Black pop culture that from Beyonce's Lemonade and her sister Solange's album A Seat at the Table to Cardi B's reductive Invasion of Privacy.

Exactly. The barbs have no quarrels with Cardi. It's the bum ass Twitter that hate on sex positive successful black women foh

While I don't think either Cardi or Azealia have as thought-provoking messages in their music as Solange did in her album, what Azealia said in her interview definitely holds true when the media determines who's got the "talent" to be in the A-list market.

Ultimately, there's no real message in Cardi B's music. And what's more disappointing is that she and her PR team aren't doing anything to help elevate her to compensate for it, and over time, the ratchet caricature Banks described will eventually fade, and people will be curious to know what more Bardi has to offer than her one note feminist "pussy poppin" and "I got money now, so fuck my haters" bars.

Although I may agree with Azealia in this instance, I'm not at all saying she's an angel in any way, calling Cardi, herself, an "illiterate, untalented rat," and known for fighting people online, but it's the hypocrisy of how we only hold the lighter rapper to a higher standard when her name-calling is equally wrong that's the most telling.

In an interview with Zendaya, Cardi finally acknowledged her Caribbean background

In March, Zendaya spoke to Cardi in a one-on-one interview for CR Fashion Book. Before then, Cardi hadn't addressed her race in interviews, and telling the actress she was tired of explaining her race. "One thing that always bothers me is that people know so little about my culture. We are Caribbean people. And a lot of people be attacking me because they feel like I don’t be saying that I’m black," she said.

"When my father taught me about Caribbean countries, he told me that these Europeans took over our lands. That’s why we all speak different languages," she added.

“I expect people to understand that just because we’re not African American, we are still black. It’s still in our culture. Just like everybody else, we came over here the same fucking way.” 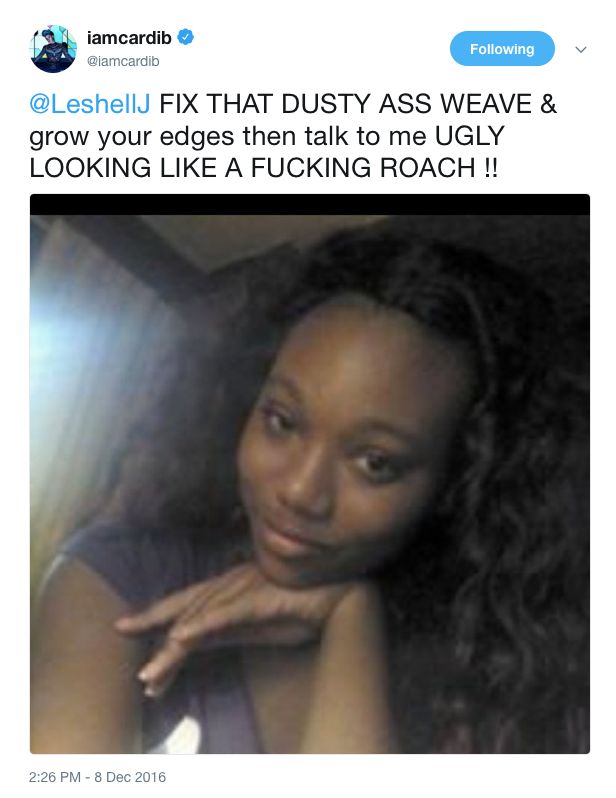 As women in general, we're always told not to tear other women down — but in the case of Black women, the request holds even more weight.

Cardi has been under fire in the past for calling other Black women roaches, monkeys and other racially insensitive slurs. On the other hand, if and when a person of color takes the initiative to claim their Black roots, like Cardi has, there's a sense of responsibility every Black person attempts to carry (whether they have a platform or not) to represent Black people and its culture in a positive light. But as we've seen many times, Cardi B has no intention of doing that.

Me and her got into a lil bout on here and she called me a monkey ? idk if she black or not but it was still weird and childish of her https://t.co/NKGDBeEbjg

And while Cardi's made it clear she doesn't want to take on the responsibility to make sure Black people look good amongst all other races, her behavior, attitude and persona do, in fact, reinforce the stereotypes of Black women, licensing non Blacks to also call us monkeys, roaches and of course, niggers.

Cardi B has been calling dark skinned women roaches, & all other problematic names for years.. she didn’t identify as black until last year. She was hella colourist & we all seen it and turned a blind eye.. championed her and pushed her career full throttle.

The various stereotypes that Black women (especially the darker ones) have had to carry include being loud, obnoxious and sometimes even that we stink.

If you're having sex with a dark skinned woman there is always gonna be a terrible smell, that's why you gotta do light skinned women.

However, being loud, obnoxious and over the top extra are characteristics that Cardi wholeheartedly embodies, and she's praised and paid for doing so.

I’m still not seeing a fair representation of BW in television or film. Of course I mean dark-skinned actresses who only get fair treatment in projects created by women of color. Dark-skinned actors have zero problem getting work but women with the same hue are still rejected. ?

Before she deleted her Instagram entirely, Cardi had these last words for Azealia, proving she inherently doesn't want to be the beacon of Black culture: "A woman who constantly finds joy in belittling black women (Beyonce, Rihanna, Skai Jackson, Remy Ma), can't try and stand for them because it's convenient," she said. "I'm not trying to represent nobody but myself. You busy trying to be a voice of reason and a representative for women of color when you can't even reason with yourself."

Despite Cardi having been catapulted in the limelight along with her light-skinned privilege like other Black female rappers that paved the way such as Eve, Trina and even Nicki Minaj, they made it a point to work their minds and their lyrics to make people say "Damn, a female really said that" when developing a message in every one of their bars. Cardi, unfortunately, has failed to do that. And quite honestly, has never even tried.

● Angry fans are comparing Sabrina Claudio to Camila Cabello, Selena Gomez because of her racist online past