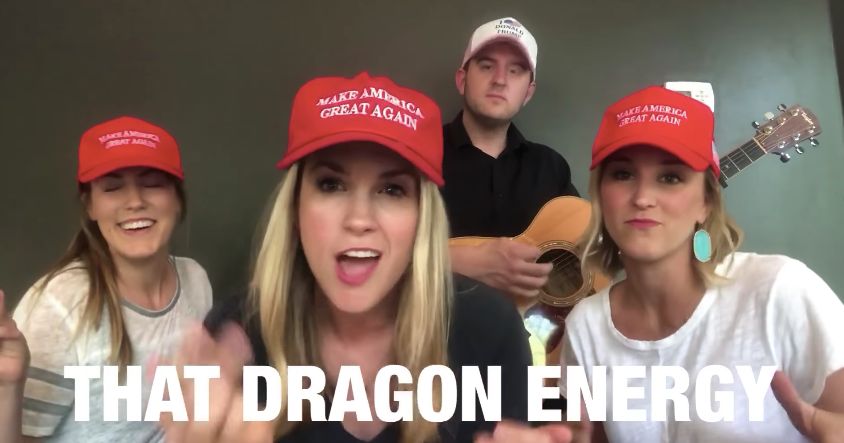 Let's face the facts here, people: Youtube isn't cool, singing in a group isn't cool unless you're all cute boys, and liking Donald Trump is the least cool thing of all. Just ask everyone who unfollowed Kanye!

But nevertheless, the Deplorable Choir persisted to make Trump-inspired music and post the results on Facebook, Twitter, Youtube and Instagram. The group seems to consist of three blonde women and their guitar player, who they call "Deplorable James." I hate Deplorable James the most of all, because he is complicit.

Since they first started posting videos in late March, they've dedicated songs to Hillary Clinton, Mark Zuckerberg, David Hogg and Donald Trump. Follow me through a quick overview of their discography. I listened so you don't have to, and I'm not linking because I'm petty. You've got Google.

Why are you still here? A song to Hillary Clinton

"Why are you still here?" is a song about the fact that Hillary Clinton didn't win the 2016 election.

In it, Hat Deplorable (who seems to be the group's lead) asks Hillary and liberals why they are "still here" even though their candidate lost, which may or may not be a threat on millions of lives.

The song's opening gets straight to the point: "I know she'd like to think she'd have my vote/ if it weren't for my husband/ but today we're setting her real straight that we were the ones to choose/ we might be just white bimbos/ but we know we don't like YOU!"

You, in this case, serves as a stand-in for liberal and Clinton herself. "So Hillary… why are you still here? Didn't you lose?" The Choir asks Clinton in the song's chorus. Why is she still where exactly? On…earth?

Why is David your face for gun control?

"Why is David your face of gun control?/ His secret that no one seems to know/He only finished puberty not long ago/And now he's SCREAMING/CRYING/CUSSING/RUNNING YOUR SHOW!"

At first I was like, who's David? But it's David Hogg. This is a song about David Hogg, in which the members of the Deplorable Choir demand that a school shooting survivor seek therapy and say that "someone needs to spank him now." But at least they admit he's a real teen and not a crisis actor. Stay classy!

I think this might be a gesture at a rap song — and if so, it makes Iggy Azalea look like Tupac. In this video, the D.C. threatens to physically fight Mark Zuckerberg for censoring conservative women online.

Am I being dramatic, or is this song's chorus a little violent? Read along and see if you agree: "MUTHER ZUCKER/Come meet me out back/With my can of whoop ass."

Again, I'm not saying that this musical group is a threat to multiple famous figures and needs to be closely monitored by independent government agencies but maybe somebody else would!

Also, where the fuck is Deplorable James?

Can you say winning?

Okay, so this is their newest video, and it's basically pure Trump ass-kissing. It references that dumbass "dragon energy" thing Kanye tweeted, marks the first time we see C.J. without braids, and also has the best sound quality.

"That witch hunt has more holes/Thanks to Judge Ellis/Caught 5 men from ISIS/What more can you tell us?/Moved that embassy out to Jerusalem/God Bless Trump/And all that he's doin'!" The whole song is basically a laundry list of Trump's "accomplishments." No school shooting talk here, huh?

Also, this video features a new guitarist, "Cowboy Jesse." I guess Deplorable James is probably too busy taking pictures of his truck or calling ICE on a McDonalds cashier who wasn't "respectful enough."

● We talked to that guy who compared necrophilia to abortion on Twitter, and it got very weird