The school district says they were ‘disciplined’ 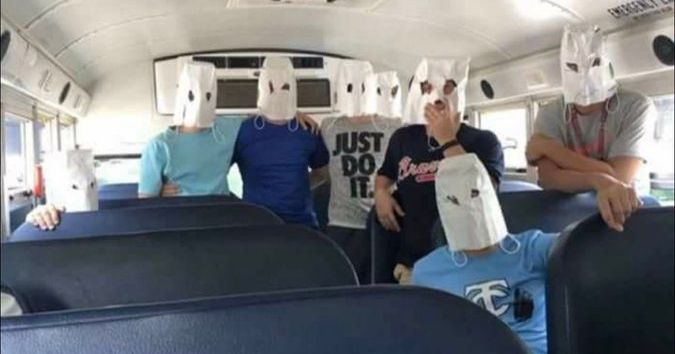 Members of the Telfair County High School tennis team of McRae, GA sparked outrage in their community and online after posting a photo of themselves with white bags over their heads and eye holes cut out, a look that's too KKK hood-esque for anyone's comfort.

Now, according to TCHS principle Eric Cowart, the students are being punished.

"The school district and the high school do not support that behavior in any manner whatsoever," Cowart told babe in a superintendent-approved statement. "We found the image to be highly offensive. We learned about the photo late Tuesday afternoon, began an investigation on it and disciplined the students who were involved in that incident."

Cowart declined to comment further on the nature of the disciplinary action and directed "media inquiries" to the district's superintendent, but did tell us this: "We have great kids here at Telfair County High School."

This is a Georgia high school tennis team posing as KKK members after losing to a black team. Evidently they're sore losers.

Telfair Superintendent Lenard Harrelson has yet to respond to multiple requests for comment.

According to the 2010 Census, Telfair County is 57 percent white and 36.6 percent black, a slightly higher black population than the Georgia state average.

We spoke to a student named Baysia, a 16-year-old junior on TCHS's track and field team, about how the incident had affected her community. She said she first came across the photo on social media on Monday night, after it started circulating over the weekend. She said she wasn't offended, but she was surprised.

Oh no, no, no. These aren't older white supremacists. These are high school students! Where are they learning this hatred?https://t.co/d0rEzBUS6B

"Everybody's been talking about it, it's been all over Twitter," she told babe. "I don't think they meant harm, but it's still common sense not to post things like that because of how it looks."

She also said she heard rumors the seniors involved in the photo wouldn't walk at graduation, and other students were suspended for the rest of the school year, which ends next week.