Meet the Michelle Carter Fan Club: Thousands of people are obsessed with the suicide-texting girlfriend

Michelle Carter, the young woman sentenced in the texting suicide case, is hoping to win an appeal – and she has a personal fan club fighting in her corner. Convicted of involuntary manslaughter, Michelle was given 2.5 years after texting her boyfriend Conrad Roy III to kill himself. "You need to stop thinking about this and just do it," she messaged him. "You have everything you need. There is no way you can fail. Tonight is the night. It’s now or never."

Prosecutors said Michelle was playing a "sick game of life and death" with Conrad, bombarding him with texts that encouraged him to die and provided him with practical advice. Her own legal team says that is inaccurate and that prosecution "cherry-picked" key evidence – it never came up at the 2017 trial how Michelle tried to get Conrad professional help for his suicidal thoughts.

Michelle Carter stans have picked up her lawyers' arguments and have joined a small but loud community to campaign for her. They are members of The Official, Real Support For Michelle Carter and Justice for Michelle Carter on Facebook, and ferociously defend her against online critics.

One of those stans is Dawn McGhee, from Dallas, who told babe she believes Michelle is not guilty and hopes she wins her appeal. "I support her because I don't believe her to be criminally responsible for the death of her boyfriend," she said.

Steven Sheppard, the manager of the Justice for Michelle Carter Facebook page, added that he has been interested in her case for over a year. "I support her both for her legal innocence and for her moral innocence," he said. "Yes, you heard me right. When the texts are read and understood in context, whether Miss Carter was telling him to go to McLean [Hospital], or telling him to get back in, everything she did was compassion-oriented and had a helping aspect to it."

Steven, who runs an active Facebook page and Twitter account dedicated to Michelle, believes she genuinely cared for Conrad, and didn't wish him harm at any stage. "She was very sympathetic and understanding, perhaps to a fault, but any mistakes she perceived she'd made afterwards, were errors of knowledge, certainly not breaches of morality. She had nothing but the wellest of well intentions in trying to help him out of the situation he was in." 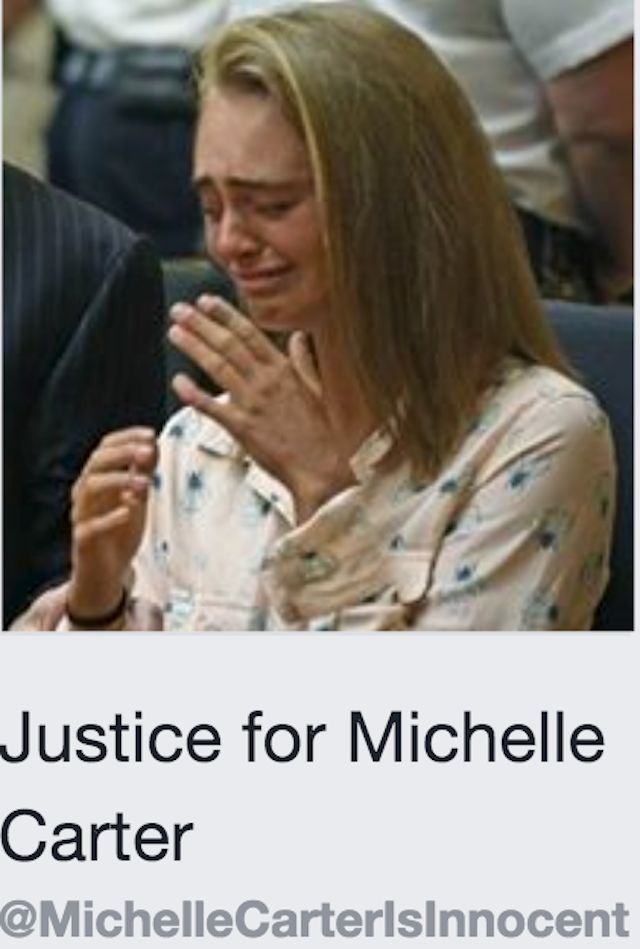 Steven says he's fascinated by Michelle, and has read up on her – and not just about her case. "My interest goes beyond just the trial. I'm interested in all things Michelle. Other aspects of her life were covered in the material from the trial, but I have read at least one article about what she was like in school, that was outside of the trial."

He added that he has received "many nasty, hateful comments" for stanning Michelle. "I've had to ban so many people, very few are intellectually mature enough to survive even their first comment there."

One of the five admins of The Official, Real Support For Michelle Carter Group, Florian Ridoux, told babe he started stanning her because he thinks she is "completely innocent." He went on to say "She didn't push or harm him in any way. Laws are laws, but she didn't break any, OK? She therefore there shouldn't even be a debate, and what's happening to her is a tragedy."

Florian moderates a Facebook group where Michelle's fan club from around the world gather to praise her – the most recent post is by a thirsty-seeming guy from France named Jean Paul, who asked if anyone in the US would "send his support to Michelle!"

"I am sure she knows it, and is glad to see all this support from strangers, who understand her situation," responded an admin. "Merci!!" said Jean Paul.

Michelle: I think your parents know you’re in a really bad place. I’m not saying they want you to do it but I honestly feel like they can accept it.

They know there is nothing they can do. They’ve tried helping. Everyone’s tried, but there is a point that comes where there isn’t anything anyone can do to save you, not even yourself.

You said your mom saw a suicide thing on your computer and she didn’t say anything. I think she knows it’s on your mind and she’s prepared for it.

Everyone will be sad for a while but they will get over it and move on. They won’t be in depression. I won’t let that happen. They know how sad you are, and they know that you are doing this to be happy and I think they will understand and accept it. They will always carry you in their hearts.

Conrad: Right. That’s what I’m talking about. I read so much about failed attempts gone wrong that it’s gotten me discouraged.

Michelle: Yeah, exactly, so stop doing that. There is more success than there are failures.

Conrad: Are you kidding me?

Michelle: You have to look at it that way and people only fail because they have the same mindset as you. Thinking they’ll fail.

Conrad: I really want to believe you.

Michelle: Why don’t you.

Michelle: You can’t think about it. You just have to do it. You said you were gonna do it. Like I don’t get why you aren’t.

Conrad: I don’t get it either. I don’t know.

Michelle: So I guess you aren’t gonna do it then. All that for nothing. I’m just confused. Like you were so ready and determined.

Conrad: I am gonna eventually. I really don’t know what I’m waiting for but I have everything lined up.

Conrad: I promise, babe. I have to now.

Conrad: Where do I go?

Michelle: And you can’t break a promise. And just go in a quiet parking lot or something.

• Michelle Carter will win her appeal, according to legal experts

• ‘I heard him dying’: Michelle Carter texted friend after her boyfriend’s suicide

This teacher was racist against her Asian student, so a 15-year-old Instagram activist took on the cause and got her fired

Last week @asian.actiivist, an Instagram account with over 13,800 followers managed by a 15-year-old girl in New York, got a teacher in Tennessee fired for using racial slurs against an Asian student.She asked us to withhold her name as she is a minorOn Tuesday, @asian.actiivist posted about a teacher named Shonterikka Williams who called an…

Bruce Hay says the allegations are ‘false and defamatory’

A top Harvard law professor is not teaching this semester following accusations of sexual misconduct, according to legal documents seen by babe.Bruce Hay's summer and fall classes were canceled by the university after they received complaints about his behavior in April.Hay is a high-profile member of Harvard's law community. He graduated from Harvard Law School…

Christian ministers are hosting ‘help my child is gay’ seminars

A cottage industry of "ex-gay" preachers is targeting LGBT kids and their parents with attempts to trying to shame and terrorize them into rejecting their sexuality. Christian pastors are getting paid to bully and pressure young people into being straight – pastors like Sophia Ruffin, a youth minister who charges $60 to "helping parents and leaders…