So with Riverdale Season 3 Episode 7, there’s good news and there’s bad news. The good news is that I’m starting to think that the Riverdale writers are actually reading my recaps, or at least spending a lot of time scouring r/riverdale, because they FINALLY decided to stop jumping around madly from one disjointed plotline to another. Instead, they split the episode into three cohesive parts: Archie and Jughead, Veronica, and Betty. Thank GOD! No more 30-second long scenes interspersed with random jump cuts that only succeed to a) confuse the shit out of me and b) make my notes literally unintelligible!

The bad news, however, is that everyone’s least favorite character is back on her bullshit. I am speaking, of course, about Ethel Muggs. Last time we saw her, she was wearing a ridiculous crown of sticks in the bunker, bragging about dating a guy who later offed himself (probably because he couldn’t stand her), and forcing Jughead to play a twisted game of Russian Roulette and blackmailing him into kissing her. When she wasn’t doing that, she was walking around with a smug, holier-than-thou attitude that she literally did nothing to deserve.

No for real, does ANYONE like Ethel? If so, you can kindly fuck right off.

Archie is so fucking dumb, I honestly hope he dies 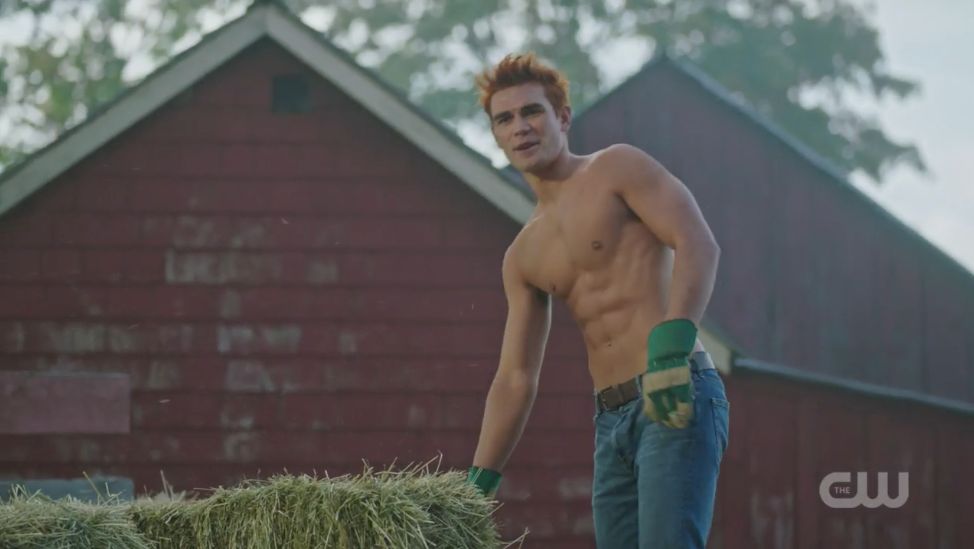 Once upon a time, I was rooting for Archie. I think I was, at least..? Maybe for like 5 minutes into the first episode, until I learned that he was fucking his teacher and trying to pursue a career as a musician despite having no talent whatsoever. That’s when I lost all respect for him, and honestly it’s been a slow and steady decline from there on. Like, remember his neo-Nazi gang? His pathetic excuse for a prison break attempt? His sheer lack of competence when it comes to literally anything that requires more than rippling abs and brute physical strength?

Now I’m ready for him to die. No, seriously! If Hiram wants him dead, so be it. Shit, when that weird 11-year-old farm girl pointed her rifle at him in the beginning of the episode, I almost WISH she fired. Archie, as well as the long-suffering viewers of this show, crave the sweet release of death.

Jeez, Archie. Why don’t you just tell her all of your mommy and daddy issues while you’re at it?? Tell her your social security number, HECK, just give her your passport and debit card and credit card!!

Even Jughead realizes what he’s dealing with now. When Archie tells him to go back to Riverdale and take care of Betty, Jughead replies, “No offense, but Betty took down a serial killer last year. You can’t go for five minutes without being kidnapped or getting the crap kicked out of you.” Literally seconds later, Archie has been knocked out with a frying pan and tied up in a barn awaiting execution from Hiram Lodge. Don’t say we didn’t warn you, Archiekins!

Veronica embraces her true nature as a selfish capitalist pig 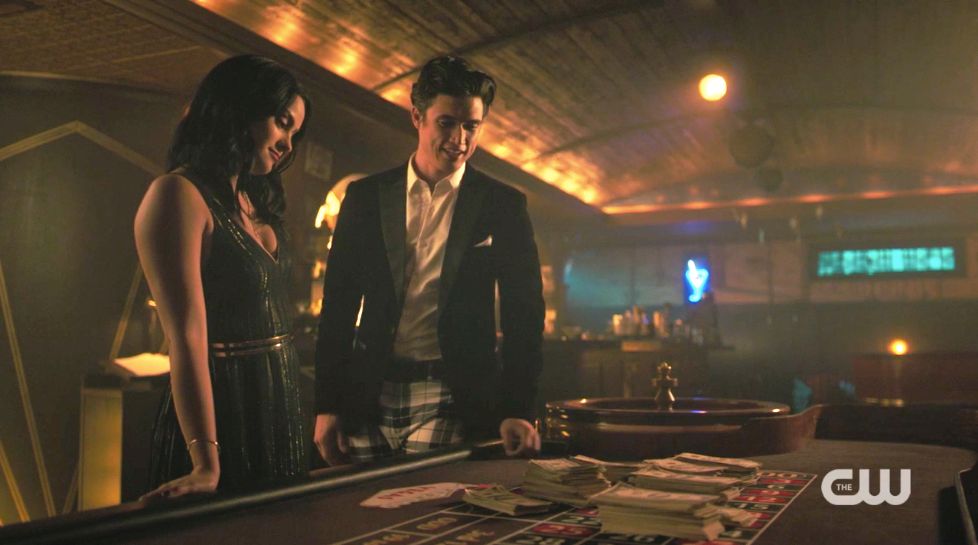 Veronica remains blissfully unaware of the Satanic cult that’s destroying the lives of everyone around her, because her head is shoved so far up her own ass. All this capitalist pig can think about is how much money she can make. I’m not even exaggerating! Literally her ENTIRE plotline is about how she wants to make more money from her speakeasy and how she’s willing to work with criminals (and then screw them over) to get what she really wants — which is a fat stack of cash. And, you know, flirt with Reggie here and there. Who needs Archie when you have a sexy hunk of Asian man meat in front of you?

Meanwhile, her best friend is held captive at the Sisters of Quiet Mercy, her ex-boyfriend is on the run from her murderous father, and 75 percent of the population of Riverdale is dead. There is a legitimate CRISIS going on around her, and this idiot is just playing blackjack and smugly saying things like “It doesn’t matter how you win so long as you’re the last woman standing” like she’s the star of her own reality TV show or something. Newsflash, Veronica!! Nobody cares about your damn speakeasy except for you! And Reggie, I guess, but that’s only because he wants to fuck you.

Either way, all of my sympathy for her from last episode is gone. Without Archie’s mitigating influence, she’s just an unbridled ruthless businesswoman with no moral compass or empathy whatsoever. Even Pop Tate, the sole voice of reason on this show, is disappointed in her behavior. “Please, for your own sake Veronica, don’t be like your father,” he says to her after he learns about how she colluded with criminals to make a ton of money on casino night. “Deep deep down, maybe my dad’s not so bad,” she responds. Umm Veronica…? Do I need to remind you of all the times your dad tried to get Archie…KILLED? Did you just kind of forget? I guess she got distracted while she was playing in her pile of hundred dollar bills. Happens to the best of us! 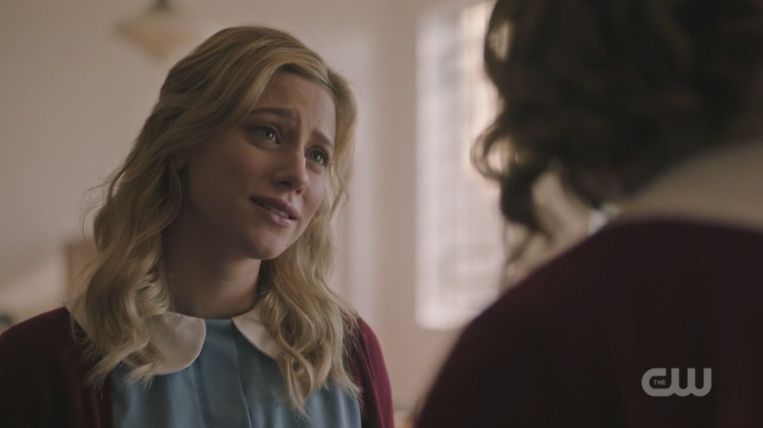 Poor, sweet Betty. Her utterly insane mother decides to protect her from the Gargoyle King by…sending her to the Gargoyle King. Fortunately, Betty isn’t an incompetent idiot. Unlike the rest of the characters in this godforsaken show who would’ve undoubtedly done something stupid like beat up a nun (Archie) or burst into tears (Cheryl) or delivered a long Shakespearean rant about how she’s rich and better than everyone else (Veronica) or brooded around with an angry expression on his face while running away at the slightest hint of danger (Jughead), Betty actually knows what she’s doing. What a RELIEF.

Trapped and alone, Betty roams the creepy halls of the Sisters of Quiet Mercy and engages in conversations with herself in her head. You know, since she doesn’t really have anyone else to talk to. Without a doubt, Betty’s internal dialogue was the best part of the episode (dare I say, the entire show?) because it showed me something that I always knew — underneath the sweet nice-girl exterior, she’s one sassy bitch. When Sister Woodhouse shows her an ink blot and asks her what she sees, she thinks to herself, “A dead body, you idiot.” Wow okay, tell us how you REALLY feel, Betty! And then when Ethel (ugh) tells her that “things got hot and heavy” between her and Jughead, Betty stares at her incredulously and thinks to herself, “This psycho bitch.” Thank GOD for Betty’s internal dialogue!!

Although to be fair, her out-loud dialogue is also pretty fucking incredible. When Ethel gets on her last fucking nerve by inviting her to play Gryphons & Gargoyles — “Betty you said we were friends! Friends play together!” — Betty goes OFF. I’m not kidding. She FINALLY snapped…and it was beautiful. She walks up to Ethel’s face and says, “You wanna be friends Ethel? Hmmm that’s weird because real friends don’t kiss each other’s BOYFRIENDS.” Ethel stammers out some half-assed excuse about how the Gargoyle King wants her and Jughead to be together, and Betty laughs pityingly into Ethel’s stupid face. “Awww Ethel-head,” Betty croons. “In your dreams.”

The best part is that this isn’t even Betty going off for no reason! No, this is part of her MASTER PLAN to find evidence and then escape. So after she destroys Ethel’s entire life with a single sentence, Betty pretends to have a seizure so that the nuns put her in the infirmary. There, she picks the lock to the medical records cabinet with a paper clip (I see you, Nancy Drew!) and finds evidence that Hiram Lodge is using patients as lab rats for Fizzle Rocks, the new drug he’s manufacturing.

This plan actually would’ve worked perfectly, except the nuns sealed off the secret exit that Betty was planning on using. Oops! But I guess after Betty & Co. used that exact door to break out Cheryl, I’m not entirely surprised the nuns were like, “This secret exit is probably not a good idea.” Poor Betty is forced to take a bunch of Fizzle Rocks and then she’s thrown into the Gargoyle King’s chamber.

And this is FINALLY the moment when I start to feel a little bit afraid of the Gargoyle King. Because Betty — our sweet, intelligent, cunning Betty — is broken by him. What happened in there?? Will she be okay? Goddammit Jughead, just leave Archie out there to die and SAVE BETTY! Betty is the only good character on this show and she needs to be protected at all costs.

• Every character on Riverdale is just dead or missing, I guess? (Season 3 Episode 6 Recap)

• Riverdale has officially stopped giving a single fuck, and honestly I respect that (Season 3 Episode 5 Recap)

• Riverdale has gone completely off the rails (Season 3 Premiere Recap)

#FlashbackFriday: The time a teenage Demi Lovato stan account tweeted a bomb threat at an airline

Where were you in 2014? In April 2014, specifically. I was finishing up my second-to-last semester of college, eating cereal out of ziplock bags so I didn't have to wash a bowel, and doing dumb shit like wearing Nike shorts to meet the university provost. What I wasn't doing was tweeting joke bomb threats at…