I tried a banana cleanse and self-destructed

It all started with the scariest phrase of my adult life: ‘bowel realignment’

Fad diets are everywhere. A two-word google search unleashes a world of juice cleanses, teatoxes, and– the most recent fad of them all– monomeals. A monomeal is exactly what it sounds like, you eat only one food– for every meal. Some people (cue Freelee the Banana Girl) swear by monomeals for weight loss, ease of bloating, and taking the guesswork out of healthy eating.

I decided to take on the most extreme fad diet I could find, short of starving myself, to see what all the noise was about, and I set my mind to eating nothing but bananas and water for a full week. I read up on the pros and the cons of this cleanse and somewhere between those categories lay the promise that monomeals will “realign your bowels”… Whatever the fuck that means.

Alas, I geared myself up and went grocery shopping on what looked to be a promising Tuesday.

I also started to make a running tally and journal of my thoughts and feelings throughout my banana cleanse journey.

Walking past food carts is torturous. All other forms of food smell so good. Nauseous. Hungry, but not for a bananas, so I guess I’ll wait until one sounds appetizing again.

The person next to me in class just asked me why I have so many bananas….. I wanted to cry.

By the end of the first day my friends and mother were already expressing their concern. I reassured my mom it would take 318 bananas in less than 30 seconds to overdose on potassium but my friend Sydney had a slightly different concern in mind:

Sydney, “Vitamins just make your pee expensive. But that’s only if you’re eating a regular diet, and you’re not. I’m just worried you’ll turn into a banana.”

By the end of the first day I had engorged myself with 18 bananas and felt relatively pleased with myself, the first day should probably be the hardest, right? WRONG.

I just woke up and the first thing I did was eat a banana and all I want right now is a bomb ass panini.

I have a splitting headache… not sure if due to organic chemistry or bananas.

I don’t think I’m ever going to want a banana again… I just shed a real tear because I want food other than a banana so badly… I wiped said tear with the peel of a banana.

Wednesday around dinnertime I was getting desperate for some variation on my raw bananas. I decided to mash and heat up four bananas with a little vanilla and cinnamon added to try to spice things up… This was a horrible mistake.

Don’t heat it up. That was a bad move.

But despite the horrible mush I had just experienced I had to prevail and my body needed more nourishment.

Can’t tell if I’m full or just sick of bananas.. My roommates think I’m crazy, and I think they’re right.

At the end of the day on Wednesday my total consumption for the cleanse was at 42, and I have never craved hummus more in my life.

By the time Thursday rolled around I’m fairly sure I shed more tears relating to bananas than any free person ever has before– The Tab owes me and my bowels big time for this.

I just ate an entire bunch of bananas in the duration of one 50 minute class period and at least three people gave me weird looks. I would have given myself weird looks too.

My roommate just caught me staring longingly at our fridge… She asked me what I was thinking about and I’m pretty sure I just moaned and cried a little. I’m beginning to regress to ape status.

The cashiers at the grocery store are starting to recognize me as “the banana girl.” Don’t know if that’s a compliment or an insult.

By the time I got home from my 12 hour long day on Thursday my friends noticed a visible difference in my usually cheery and sarcastic demeanor. According to one of them I was “noticeably quieter and less expressive.” This comment was sadly not surprising to me.

Three days down… I’m just going to go to bed so maybe my hunger will go away. I will never enjoy a banana again.

My total cleanse tally was up to 63 bananas in three days.

I should have downed more bananas before class. Currently fantasizing about mac & cheese and sandwiches during lecture.

Aaaand finally I had had enough: 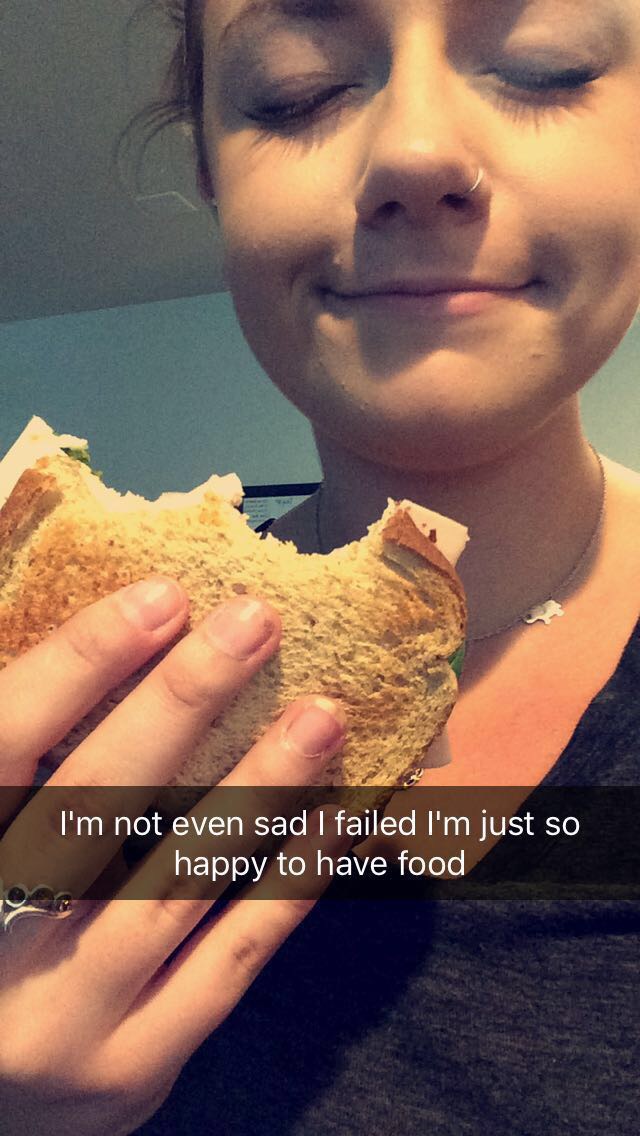 It has been four whole days since my last banana and my digestive system is apparently still working on “realigning” itself. I faithfully ingested nothing but 67 bananas and countless gallons of water over the duration of 84 hours. Everything I read told me I would see an improvement in energy levels, and I would feel “cleaner.” I call bullshit. I felt exhausted and defeated, and I actually cried on several occasions. Plus, there were no visual differences in my outward appearance other than a sunken face.

Potential cleansers cleanse at your own risk and beware: I don’t know if I will realistically ever enjoy a banana– or a correct poop– again.