Pepsi has a dream 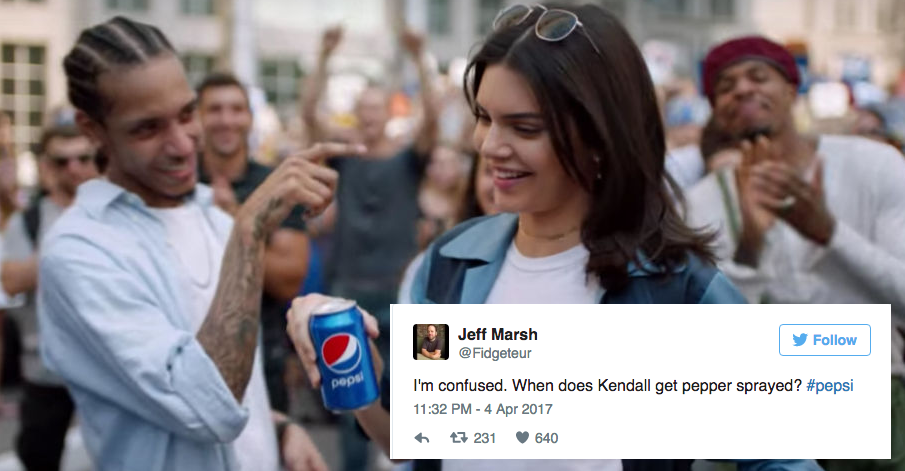 Earlier this week, Kendall Jenner saved us all from a nation tainted by overt and systemic racism by handing riot police an ice-cold Pepsi.

Twitter — and Black Twitter in particular — did what it does best and turned a tone-deaf, offensive instance into something both hilarious and teachable. Users took something insensitive and potentially dangerous and used humor to highlight the stark difference between what Pepsi portrayed and what people of color experience in interactions with the police every single day.

Here are the best, worst, funniest, saddest, smartest and weirdest reactions to that infamous advertisement:

This reaction to the ad released on the anniversary of Dr. King’s assassination

I have a Pepsi." pic.twitter.com/NW0sddKOOI

Creative Director: What if we have Kendall Jenner lead POC in a resistance march?

But they don't know I'm carrying a Pepsi on me pic.twitter.com/o3bTEWfg4u

I'm confused. When does Kendall get pepper sprayed? #pepsi

This meeting of the minds over Kendall’s ingenious solution

"Look fam, I don't really rock with you, but Kendall said if we just hand them a Pepsi we can end this whole thing real quick." pic.twitter.com/WZRoGqyQOB

WHY DIDN’T ANYONE THINK OF THIS SOONER

So you mean to tell me this whole time all we had to do was offer a cop a Pepsi and they wouldn't kill unarmed Blacks during routine stops? pic.twitter.com/pvqNEpLTz6

Subsequent headline: No Charges Against Officers Who Thought Pepsi Can Was Gun

"STOP GUYS! I have a Pepsi multi pack in my car!!" pic.twitter.com/0BamCseHUo

Oh, and this one

It’s almost as if…there’s a pattern…?

"license and registration and step outta car. Are carrying a Pepsi? I know alotta you are" pic.twitter.com/jf9BCUZwFE

Will you guys take an IOU?

"They ain't have no more damn Pepsi at the store!" pic.twitter.com/lVb8hA7Feo

Pepsi trying to learn from their mistakes

"Guess we should have set the commercial at a protest outside an abortion clinic." — Pepsi executives

The Pepsi president of marketing in tomorrow morning's meeting: pic.twitter.com/ULhHiVuO9n

The cop's face at the end. ? "You know, this thin white woman makes a good point. Pepsi MIGHT BE better than state violence!" pic.twitter.com/kaPiAvmyQQ

.@realDonaldTrump Put a little tape over your laptop's camera so Putin can't watch your jerk your dong to that Kendall Jenner commercial

Oh shit, maybe Pepsi’s in on it and is gonna sponsor the Get Out sequel