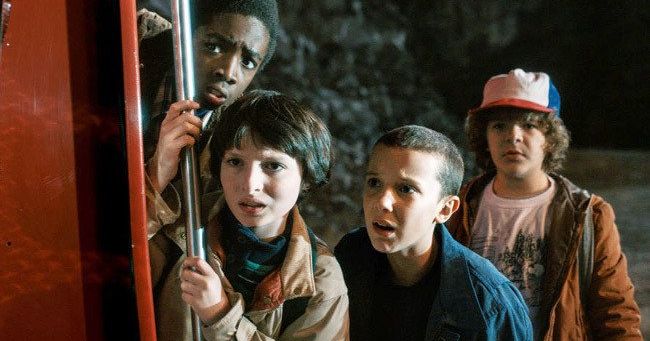 The second season of 'Stranger Things' just came out on Netflix last week, and people are loving it.

And why not? It's a show chock full of 80s nostalgia, spooky mysteries and lessons about the value and magic of childhood friendship.

It's almost universally appealing, and that's due largely to its talented, charismatic cast of child actors. They all seem to genuinely like each other, and for a while last summer they dominated the late-night talk show circuit.

Honestly: Cut that shit out. They are kids, and that is disgusting. There's nothing else to it. It's unequivocally not okay.

27-year-old model Ali Michael came under fire online for posting a picture of Finn Wolfhard on her Instagram story and asking him to call her in 4 years, because that's when Wolfhard will be 18 — the implication being that Michael is attracted to him now, as a 14-year-old.

this is disgusting, she’s literally 27 and he’s 14 what the fuck pic.twitter.com/apZRunPlIR

Luckily, people were quick to respond with anger and disgust at Michael's tasteless joke, and she issued an apology soon after. But that didn't stop people from calling her a pedophile and decrying her behavior.

“I hope this clears things up” pic.twitter.com/mwNTAvov3Q

While that might not actually be the case — Again, Michael is a professional model, and could just be too hot to be funny — it's a perfect example of our disturbing tendency towards sexualize literal children when they're also famous, successful members of the entertainment industry.

Headlines praising Millie Bobby Brown, who plays Eleven, for how "grown-up" she looks on the red carpet have also received backlash for contributing to the problem in a low-key way by making a 13-year-old girl into an adult woman.

And any woman who's ever been hit on at work or while running an unsexy errand (so like, every woman) knows that adult women are over-sexualized on a daily basis.

"millie bobby brown is all grown up!" she's like. 13. please could u just… for like two seconds don't be disgusting

And this sexualization is clearly corrosive!

Many of these stars have spoken out about the toll a famous childhood took on them both at the time and beyond. So please, if you're a fan of the show and/or just a decent human being, do not sexualize the Stranger Things kids.

Boys who can get it:

Plus, when Steve Harrington is onscreen looking like a motherfucking snack, why would you even have to?