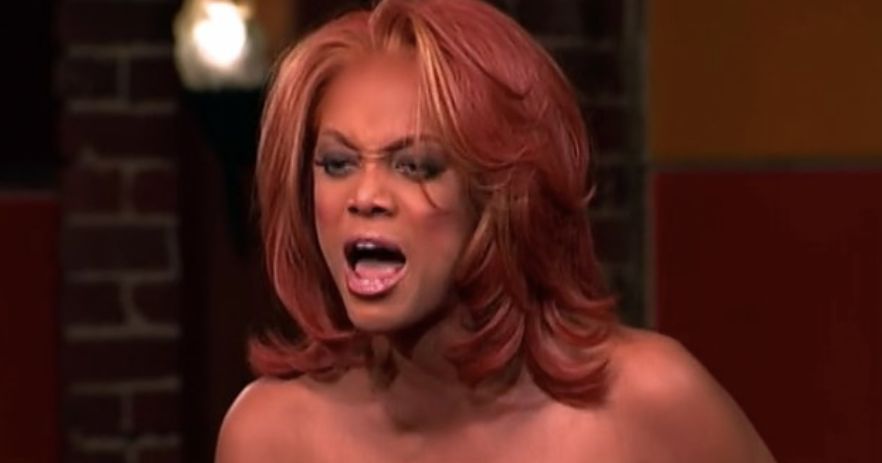 The thing about being from a very Black family is that typically all of your relatives over the age of 35 are judgmental as fuck, and won't let you get away with anything they deem ungodly or unacceptable.

So, last night, I was scrolling through my Facebook timeline, and I found dozens of things that would make my judge-y fam shun me or ship me back. That's the thing about unpopular opinions! We don't want to hear them. Hopefully you'll be smart and keep these thoughts to yourself.

We all think them, but maybe don't say them out loud lest you're excommunicated from your next family barbecue.

I don't put hot sauce on my fries chicken, matter fact I rarely put any kind sauce on it . I love it as is https://t.co/B1z01bapx2

I can't fathom anyone not dressing up those basic ass French fries from the sketchy corner restaurant because they barely have salt on them to begin with, but to each their own. I guess.

2. 'I really hate hip-hop these days'

I have a love hate relationship with the morals in hip hop.

There are only a few exceptions to this confession. And that's Kendrick, Childish, Cole and Kyle. And that's all folks. Fight me in the comments later.

3. 'Macklemore deserved to beat out Kendrick and Drake'

So i’m watching the people vs OJ & off the first episode alone it looks like he did it???

And with said freedom, I'm going to need him to do this DNA test with Khloe and prove that he's really her long lost dad. Maybe Maury Povich could get involved with that one.

The look u get when u tell a group of black people you don’t know how to play spades pic.twitter.com/Vx3utrHcd1

If you go to any family gathering, you better be prepared to be asked to play spades. I don't know spades and I probably never will even try.

Do y’all even watch basketball or just play 2k??? Lmk so I don’t waste my time replying to your tweets about the NBA……

I don't know any Black man (or wannabe Black man) in America who hasn't bought a rendition of one of the 2K franchise. I played street fighter, they play basketball…online.

@PressSec @realDonaldTrump @DonaldTrump THIS is the Congressional Black Caucus listening to your crap and wondering how the fuck you got to be president….they KNOW you’re racist…Omarosa does not count as anything… pic.twitter.com/lRLMWXjzQt

Ok. Get the fuck out…like now.

… Were you waiting for me to say something good about Jay? Because you'll be waiting 444 years for that to happen.

Nowadays, this confession may actually give you more street cred as a POC.

10. 'Can someone teach me the Electric Slide or the Cupid Shuffle?'

I'm an old fat dude and I can do it..there's still hope for you. I think. pic.twitter.com/bSc1RaU4mm

If you don't know at least the Electric Slide, are you even Black? Maybe you should seek out spitting into a test tube to get those 23 & Me results.

11. 'I don't get why my family likes cornbread'

What type of black man are you ?

Yes. Yes, you are. Martin is essentially a milestone for growing up Black. The jokes, the Jerome and idiot ass Teddy is what we live for to make us feel better about our own intellect.

If your man doesn't like giving head, you can meet your platonic friends to give you instead then

It's 2018, guys. Who's still clutching their pearls at oral sex?

I hate seeing people unironically say they think Oprah would be a good president.

My sister has always been pretty vocal about her distaste for Ms. Winfrey, but maybe that's because she would like her to just admit that Gale is more than "just a friend."

15. 'I'd rather have cake than sweet potato pie at Thanksgiving'

When somebody says "I hate sweet potato pie" pic.twitter.com/GM4qrUQ8uL

Umm…girl, bye! I bet you hated candy as a child, too. The word "sweet" is literally in the title of the recipe. Gimme that card, and go hang out with Omarosa.

IF YOU SAY YOU LOVE MAC AND CHEESE BUT MAKE THAT SHIT OUT THE BOX THEN DONT TALK TO ME ???

Giiirl, you better sign on to one of those virus-inflicting movie sites and watch Stomp the Yard or Bring It On with Gabrielle Union. Your family may not even let you into your own birthday party.

18. 'I prefer Crystal Light over Kool-Aid'

jazmin : Kool Aid is so gross i hate Kool Aid, i only like it when it’s watered down

if you're black and you don't wear a bonnet or scarf to bed, don't talk to me. i don't need that negative energy in my life. pic.twitter.com/c1Uy3xrEgm

I too don't wear any kind of headwrap to bed and that's why I wake up with a nappy "kitchen" and end up breaking every one of my combs.

Tyler has never watched In Living Color and I feel disrespected.

This guy must have been bullied at home a lot.

I don't eat all the meat off of my chicken bones, fight me…

Sorry I prefer to be a neat eater. Who's digging for meat in chicken crevices, anyway? That's like, kind of why you get a whole plate of wings.

What are you really doing with your life, though, bruh?

24. 'Beyonce is better than Whitney'

Tell me why someone said that Beyoncé is better than Whitney Houston, Mj , Mariah Carey, and Aaliyah ……. ARE YOU ZUMB ? pic.twitter.com/sRF7y5PrLW

Prepare to get the third, fourth and fifth degree from that aunty you don't like.

25. 'I hate Scandal and How to Get Away with Murder'

Summary of my feelings:
I hate Olivia
I hate Jake
I hate Quinn
I hate Rowan
I hate Mellie

Abby, Huck, David, Marcus –> they get a pass

yea. I'll say it. I still dig Sugar Ray and Smash Mouth. And if I'm being totally I'll fight ya over Hootie and the Blowfish too. So there! Let's fight. ha

lil yachty is better than tupac that's not debatable

I strongly suggest that if you want to live, keep this thought way deep in your subconscious and never let it out of you mouth around your family, friends, not even your black cat. You will get got.

28. 'I've never been into Michael Jackson'

People who aren’t or have never been into Michael Jackson I will never understand. And I don’t need that kind of energy in my life.

What is "good music" to you, anyway? Because I ain't hearing what you're hearing on Spotiy's New Music Friday playlist.

“You never watched the Chapelle show?” “No. I️ don’t know who he is? I️ mean I’ve seen Jimmy Kimmel and Fallon!”

You must be delusional if you've never watched Chapelle in a whiteface.

You must be stressed, my dude. Because if I had to live in fear of leaving my house everyday, (I do) I know some kind of sedative needs to be consumed before leaving my house to write long as shit pieces like this one.