Katherine Tate is a Republican who hopes to be elected to the House of Representatives in the midterms. She's competing in Mississippi's 3rd Congressional District, and will face five other Republican candidates in the primary on June 5th. She also thinks slavery was good!

Babe trawled through Tate's Facebook history and uncovered a load disturbing posts – one of the worst was a rant where she claims slavery in America was a pretty sweet deal for the slaves.

Before Emancipation, she writes, her family owned (owned!) over 100 slaves who all had a really great time. "They were well treated members of the family," she said in the post, "and contributed to decision making for running the business." 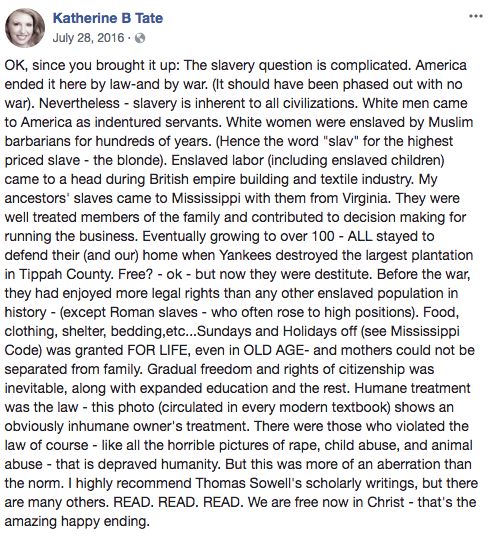 After the Civil War, Tate thinks her family's slaves were then worse off. She writes:

"Free? – ok – but now they were destitute. Before the war, they had enjoyed more legal rights than any other enslaved population in history. Food, clothing, shelter, bedding, etc. Sundays and Holidays off was granted FOR LIFE, even in OLD AGE – and mothers could not be separated from family. Gradual freedom and rights of citizenship was inevitable, along with expanded education and the rest. Humane treatment was the law…But this was more of an aberration than the norm."

You would think peddling myths about how the Confederacy was Actually Good would be something foaming white supremacists would do, but Katherine Tate is hoping to take her backward views into public office. She has made a stir during the Republican primary, most recently with some bonkers opinions on the cause of gun violence in schools. "It’s gotten out of control," she said in a debate. "Get the federal government out of this godless, Marxist, statist, anti-god, anti-Christian control of schools."

And she doesn't stop there. Back on her Facebook profile, Tate traffics in bogus conspiracy theories about George Soros, a billionaire philanthropist, who she calls "Satan." Tate thinks Soros is trying to take down America (Soros is Jewish, so a lot of anti-Semites hate him).

She also thinks Muslims in London run slave markets, which is Islamophobic garbage. She doubled down in a later comment, calling Islam "the devil's religion."

One more: Tate said it was a "fine day" when Nazis held a rally next to a Robert E Lee statue. A week later, she said the decision made in New Orleans to remove the Confederate general's statue was a "disgrace." 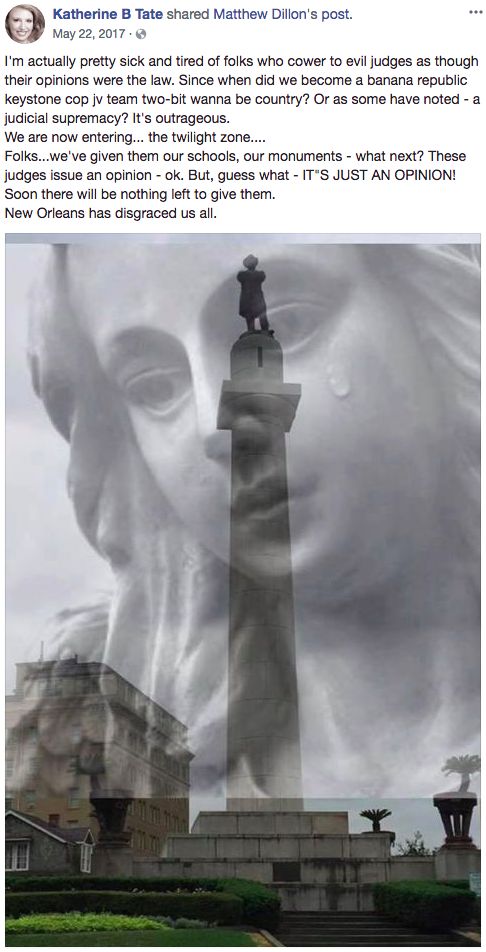 Tate is obviously mad as a spoon. We've asked her to comment, and will update this post if we hear back.

• We found five Republican candidates for Congress who made racist, Islamophobic and pro-Confederate posts on Facebook