It's Mother's Day, and you already know how we're celebrating here at babe — we're ranking MILFs like our lives depend on it. You guys like it when we lift women up instead of tearing them down, right? 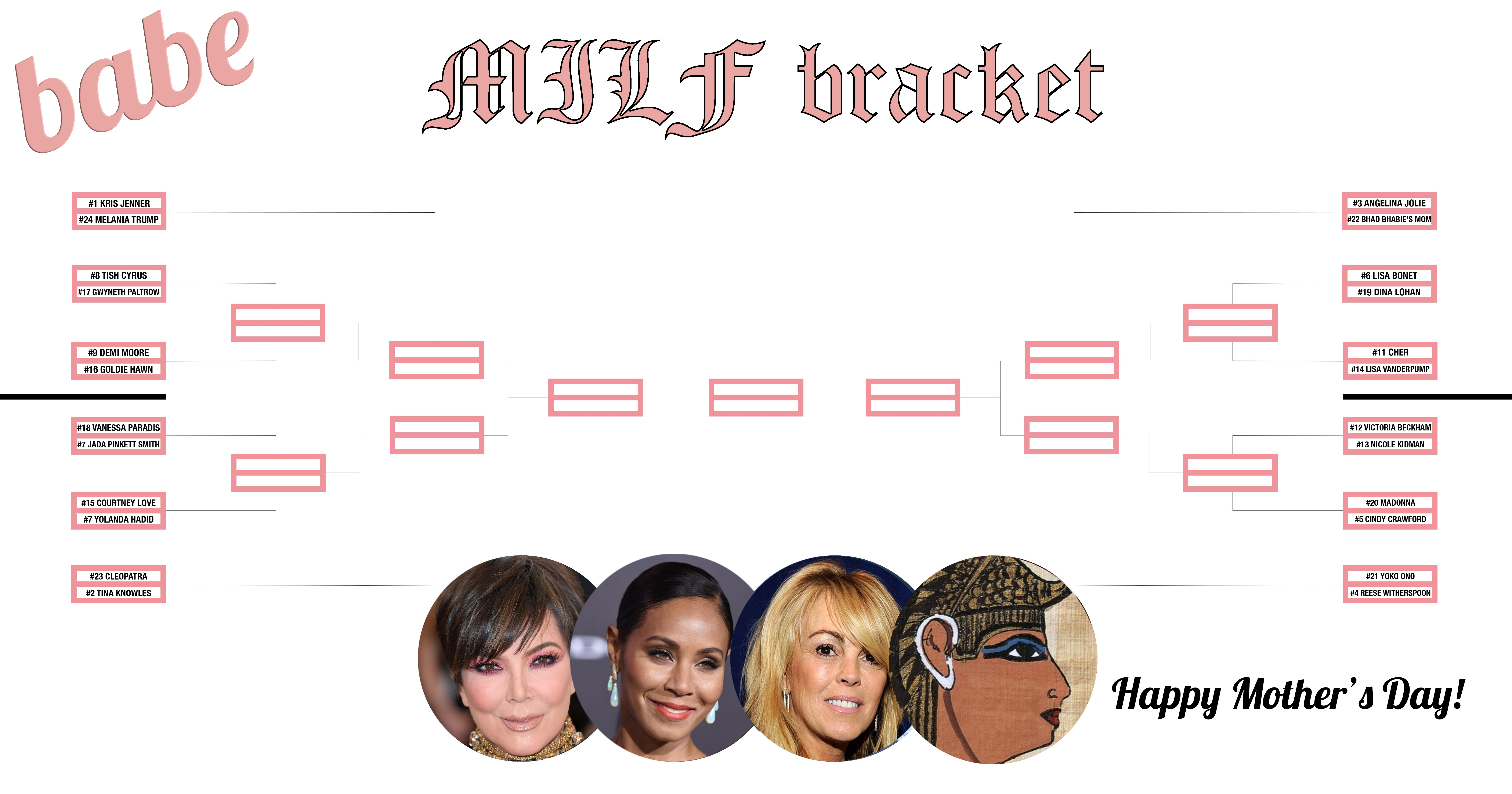 On the one hand, Melania is a former model so she used to be professionally hot — and the fact that she's Barron's mom is very clearly the only thing keeping her tethered to this world. On the other hand: COMPLICIT!

And, side note — Michelle Obama is a very purposeful omission here. We respect her way too much. But the same cannot be said about her husband's presence on an upcoming DILF bracket.

She looks hot in this tablet.

But the fact remains that cameras didn't exist in Ancient Egypt, so even though she looks hot carved in stone or etched on papyrus, we can't actually know how fuckable she was, and that's a bad thing. Next.

You guys already know how I feel about Bhad Bhabie: I literally will not shut the fuck up about her. And so, by extension, I also love and respect the woman who raised her — Barbara Ann Bregoli.

Yes, I'm a witch, I'm a bitch I don't care what you say My voice is real, my voice is truth I don't fit in your ways

Pussy so good it broke up The Beatles! Definitely had nothing to do with Lennon's Christ complex, right? Anyway, Yoko is a genuine weirdo and I think that's awesome — but most people don't agree. Plus, naming your kid Sean Lennon? That's a little much.

Sorry Yoko, but all of that means you're staying down towards the bottom of the list.

I just think she's trying too hard, and everybody knows that trying hard is a metaphorical boner annihilator.

Dina Lohan is 1000 percent prettier than me, but I'm also positive that she ruined Lindsay's life, so she's not too high up here.

Okay, so that's obviously not a current picture of Lily-Rose Depp's mom, but for the fucking life of me I couldn't find one that we're legally allowed to use, so you'll have to deal with it.

Vanessa is obviously gorgeous in that unattainable, European kinda way, but has fallen off the map post-Depp. Good for her, bad for the bracket.

Gwyneth's children aren't famous, but their names are famously dumb. Apple?! APPLE!? I hope she doesn't consciously uncouple with me for ranking her at number 17.

Goldie Hawn and Kurt Russell have been married for like infinity years and really seem to love each other — MILFtastic! Plus, Kate Hudson is such a star in her own right that I didn't even know they were related until I started compiling this list.

But she was also in that low-key racist movie with Amy Schumer, so… meh.

Did she kill Kurt Cobain? I hope not! Does she look remarkably good for someone implicated in the death of Kurt Cobain? Um, fuck yeah she does.

The @VanderpumpDogs Foundation collaborated with @Represent to curate a limited edition collection that benefits our Foundation! Our #SantaPaws hoodies & tees, featuring @giggyvanderpump make a great gift, while supporting an even greater cause. Shop the collection by visiting represent.com/store/vanderpumpdogs or by clicking the link in my bio! Profits go back into the foundation so we can continue to rescue dogs, not only in LA, but worldwide ?? #VanderpumpDogs

Taking a moment to breathe it all in. Happy Monday xx

Did you motherfuckers SEE Big Little Lies!? DID YOU SEE IT? I don't care that Nicole doesn't really have a famous child — she's famously married to weirdo Australian-but-country Keith Urban, and that's good enough for me.

Love u so much x kisses @Cruzbeckham X ✨

Cher is a woke queen, will probably live forever, and obviously knows how to put on a good show.

I'm pretty sure she's the key to the Singularity, and if she ever made eye contact with me I think I'd get so excited I'd puke. Hot, right?

She even lets poor un-famous Anwar grace her social media feed, so she's a good mom too — just don't talk about her husband's alleged bad behavior.

Demi is also the woman who introduced us all to the concept of a "cougar" — major bonus points!

Tish Cyrus has it made, man. Her kids are all (relatively) musically talented, her husband definitely worships the ground she walks on and she's blonde.

Some MILFs have all the luck!

Jada is straight up ageless, and even though she raised two children who might just be aliens, she seems genuinely happy — and that's sexy as hell!

I watched Girl's Trip with my aunt last Christmas and am happy to confirm that alway all ways, Ms. Pinkett Smith has still g-o-t i-t. We don't need to talk about the Sc*entology stuff.

Lisa Bonet is so well-preserved, I legitimately thought Zoe was married to Jason Momoa, because I'd only seen pictures of the two of them together in passing and I do not give a fuck about Game of Thrones.

She isn't verified on Instagram either, which gives her a sexy air of MILFstery. What are you hiding, queen!?

Cindy Crawford simply does not need to keep serving us looks like this. Nor did she need to produce a daughter who is basically a clone of her.

Wait a second. Is Kaia Gerber a clone?! Is Cindy Crawford a genetic engineering GENIUS? Fuck yeah, MILFs in STEM.

Cheers to 3 years, @DraperJames! ??? A perfect reason to celebrate with balloons! ??

Reese Witherspoon also looks eerily similar to her model daughter. I guess it's not that eerie, because they're related, but you know what I mean!

"I'm a mother first. The world can love me, hate me, fall apart around me. I have my kids and I'm happy "- Angelina Jolie @ajolieph pic.twitter.com/sIPSA1rGif

Is Angelina Jolie the Most Beautiful Woman? Like, ever? I really, truly believe that she is perfect looking, even though she also seems very intense.

Again, it's not that any of her individual children are famous in their own right, they just famously… exist. Which honestly sounds like the best of both worlds. Do you think Ang would adopt me, or is that off the table now that she and Brad are donesies?

Someone just sent this to me ! Wow one side me one side Bey ❤️

I am afraid of Tina Knowles. I'm kind of scared that I even put her on this list. She is very beautiful, very graceful, raised two of the most talented artists working in music, and that's all I have to say about that.

I’m so grateful for my mom and grandma for doing this shoot with me as my @kkwbeauty concealer campaign! Follow my beauty page for your chance to win a concealer kit! KKWBEAUTY.COM

Kris built an empire off a sex tape, will be rich forever, and the day she dies, a nation will weep. She is the Alpha-MILF, and we should all be bowing down.

You can print out, and fill out, the whole bracket here.

● INVESTIGATION: Is Timothée Chalamet hot? Let’s examine the evidence together

● Which celebrity would win in a fight? Vote now!